Alpha Auto Group | Electric | The Dawn of an Electric Era

The Dawn of an Electric Era

As the official premium partner of the European Championships Munich 2022, the BMW Group its brands BMW, MINI and BMW Motorrad are making the most of their home advantage and providing a fully electrified, extensive shuttle fleet to underline their commitment not only to organizing a first-class multi-sport event, but also to sharing values such as sustainability and innovation. In the spirit of being “driven by your cheers,” the BMW Group starting line-up for this major sporting event includes some of the most magnificent BMW electric cars. Among these are BMW iX, BMW iX1 and BMW i4, which may overshadow another special member of this all-star team: the BMW 1602 Electric. To get to know this hidden star, we have to go back in time.

A journey in a time machine

The 1960s can be viewed as the era of rising stars in pop culture (from The Beatles and the folk revival to the rich poetry of Bob Dylan) or as the decade of the most complex social movements and political trends around the globe. In these exciting times, as the world was experiencing new changes on every corner, another issue emerged which remains one of our biggest challenges: During the 60s, pollution in urban areas was recognized as an increasing problem. In the US, particularly in California, the decision was made to regulate emissions. The same decision was made in Europe, ultimately leading to the development of alternative fuel sources.

It was suddenly popular to do research on battery electric vehicles in the mid-1960s. One reason was because there was a strong possibility that the US could soon introduce strong legislation to reduce tailpipe emissions from cars.

Much of this research was conducted by research consortia or state agencies, which were joined by many automotive manufacturers engaged in their own research, among them the BMW Group, who focused on regenerative engines and the development of e-mobility.

The search for the electrifying element

In 1969, the BMW Group began constructing two experimental vehicles with the aim of investigating the suitability of an electric unit for everyday life. The BMW 02 Series (➜ Read also: BMW 2002: A vintage car fan’s treasure hunt), a successful model at the time, was used as the basis for this experimental vehicle.

I personally believe that the BMW Group wanted to show that their work in this area could theoretically be put on the road in a car which was already proven and successful, which everyone could already easily recognize as a BMW.

During this period, other car companies occasionally rolled out electric car prototypes featuring a special design, mostly to communicate their work in this area. But the question of why this particular car was chosen might lead us to the goals BMW Group has today regarding sustainable individual mobility.

I think it was a clear strategy by BMW Group to show that it was possible to have an electric car which didn’t have to be made different just because of different technology.

As the source of power, BMW decided to use lead-acid batteries from VARTA, which were used in every vehicle. The 12 coupled standard 12-volt batteries, positioned on a pallet in the engine compartment, powered the 85-kilogram electric motor. The manual gearbox was replaced with a Bosch DC shunt-wound motor with a peak output of 32 kilowatts and whose power was directed to the rear wheels via the intermediate gearing and prop shaft. A thermostat-controlled 140-watt radial fan took care of cooling. The battery pack weighed in at a hefty 771 pounds (350 kilograms), although it could be removed as a single unit and replaced with a freshly charged pack. The BMW 1602 Electric accelerated from standstill to 50 km/h (31 mph) in eight seconds and achieved a top speed of 100 km/h (62 mph). It had a range up to 60 kilometers at a constant speed of 50 km/h. And so the first BMW electric car was born, ready to be introduced to the world.

Three years after the BMW Group started this research, the 1972 Summer Olympics were held in Munich. They took place right next to the new BMW Group headquarters that had been completed in the same year, a stunning, fresh landmark for the Bavarian city, symbolizing the modern soul of the BMW Group (➜ Read also: Four cylinders, five decades of modernity). The fact that the Summer Olympics were right on the doorstep of BMW was a great opportunity for the BMW Group to showcase its work, especially since the environmental movement was important to many people at the time.

That was a time in many ways similar to today, when there was an increased awareness of environmental issues, and the environment played a stronger role in corporate communications strategies.

Among other iconic cars such as the BMW Turbo, which was presented at the same time, the BMW Group starting line-up included two electrically powered test vehicles. The converted BMW 1602 models served as a means of transport for the members of the organizing committee and were also deployed as support and camera cars in various long-distance events, providing clean air for the athletes following it without emissions. Unlike the futuristically designed BMW Turbo dressed in Ruby Red, which caught everyone’s eye, the BMW 1602 Electric was rather a more normal passenger car. However, thanks to the official communication, everyone knew the truly special element of this supposedly normal BMW with its bright orange color: its electric heart, hidden inside.

You had to be an expert to recognize the differences, probably most visible in the dashboard instrument pack. I am sure that nobody would have taken a second look at it, without its communication strategy.

The BMW 1602 Electric was seen more as a first development attempt than a feasible solution. Without question, lead-acid batteries weighing 771 pounds (350 kilograms), and with a range up to 60 kilometers were not ideal for a production car. BMW therefore launched a series of research and development projects with the aim of bringing improved and, above all, more efficient technology for electric drives to the road. This marked the beginning of a new era at BMW, heralded by the iconic orange BMW 1602 Electric, which can now be considered a milestone in 50 years of e-mobility at the BMW Group.

The baton handed forward: from the BMW LS Electric to the BMW i3

From the end of 1975 to 1992, the BMW Group conducted numerous research and test series: from a trial vehicle on the platform of the BMW LS to the “electric car with a high-energy battery” project, which provided valuable experience in the use of sodium-sulfur energy storage systems. Based on the promising results of the research projects, the BMW Group began developing an all-electric vehicle, focusing on limited-range vehicles designed for urban driving. The first purpose-built solution was unveiled at the 1991 Frankfurt Motor Show (IAA): the BMW E1 (➜ Read also: The BMW concept cars you need to know), an electrically propelled “city car” for use in cities and conurbations.

Thanks to all the research and experience the BMW Group was gathering, electric motors were becoming increasingly important. However, since batteries were not as powerful as they are today, electrical engines usually had to be combined with internal combustion ones. As a result, the BMW Group presented its first hybrid production vehicles in 2009: The BMW ActiveHybrid 7 luxury sedan and the BMW ActiveHybrid X6 SAC made their appearances at the 2009 IAA in Frankfurt. Almost one year later, the BMW Group pushed its research and development activities even further and presented the BMW Concept ActiveE in early 2010 – with the overall goal of creating the Megacity Vehicle (MCV) – which led to the launch of the BMW i3. 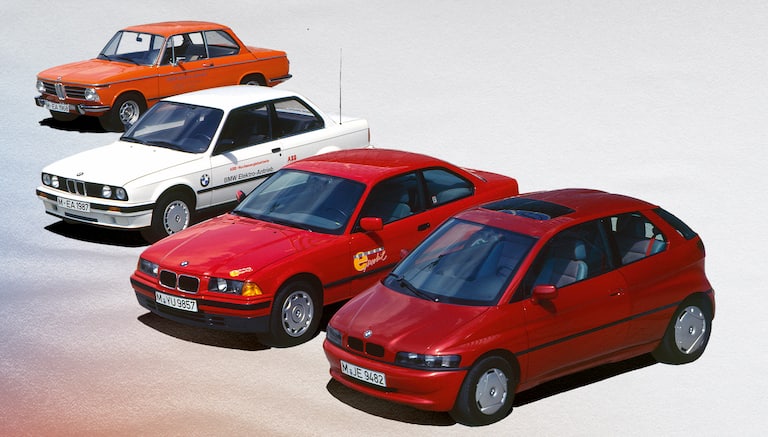 BMW i: An electric star is born

On February 21, 2011, the BMW i brand was introduced under the motto “Born electric.” BMW i (➜ Read also: 10 years of BMW i: The success story of a vision) represents a holistic and groundbreaking approach that is still redefining sustainable premium mobility – combining electric drives, innovative materials and technologies in revolutionary concepts for the future. The focus: a new understanding of premium, characterized by sustainability throughout the entire value chain. The first model under the sub-brand was the BMW i3. It was the first series-produced vehicle ever with a passenger cell made of carbon fiber-reinforced plastic (CFRP). As a result, its curb weight is in the range of a normal small car, despite the battery pack. The series production of the BMW i3 came to an end in the summer of 2022, about eight and a half years after its launch. Yet it remains an inspiration for many electric BMW vehicles (➜ Read also: Goodbye, BMW i3: This love never gets rusty).

The BMW i3 was followed in 2014 by the BMW i8 as a coupé and, from 2018, as a roadster. The BMW i8 was based on the BMW Vision EfficientDynamics concept study and, with its plug-in hybrid drivetrain, combined the performance of a sports car with the consumption and emissions of a small car. In 2019, the BMW Group presented the BMW i Hydrogen NEXT, demonstrating that it has also made further strides forward in the use of hydrogen fuel cell technologies. Two years later, the BMW iX5 Hydrogen had its first driving experience at the IAA 2021 (➜ Read also: How can we RE: IMAGINE TODAY?).

Sustainability in the long run with circularity

The BMW Group visions have grown alongside the changes that the world of tomorrow will face. In this sense, sustainability encompasses the entire manufacturing process. The BMW i Vision Circular was one of five different concept vehicles with which the BMW Group presented how it envisions individual urban mobility at the IAA Mobility 2021. Designed based on the principles of the circular economy (➜ Read also: Focus on circular economy: sustainable into 2040), the BMW i Vision Circular provides a glimpse of what the further circular future could look like at the BMW Group: an all-electric vehicle with a focus on sustainability and luxury for the year 2040.

With their highly integrated, all-electric drive technology, BMW i4 (➜ Read also: Born electric), BMW iX1 and BMW iX are fully charged for the European Championships Munich 2022 and are the frontrunners for the BMW Group electric team. Being the first runner, the BMW 1602 Electric with its humble appeal may not have been the fastest or the lightest, but it accomplished its goal and passed on the inspiration for a whole new generation of electric cars: Individual, sustainable mobility is achievable.

I believe the BMW 1602 Electric is important to the history of electric cars not only because it was the first electric car to be communicated by the BMW Group, but also because it is one of the very few electric car concepts of that era which just tried to be a conventional passenger car, instead of a futuristic design study which could not be taken very seriously.

Looking back over the last 50 years, it becomes even clearer how important this first step was. The ambitious goal of making the future of individual mobility sustainable requires many more steps, yet the most important thing remains this: Keep on running.