Alpha Auto Group | News | AAG News | What Dreams are Made Of

What Dreams are Made Of

Upon landing in Munich, I was greeted by the kind of beautiful spring day that reminds you of high summer. The warm temperatures and clear skies followed our group of journalists and editors throughout our drive down to Lake Como, where we would take in the sights and sounds of Concorso d’Eleganza at the Grand Hotel Villa d’Este which returned to its normal May dates after being cancelled in May of 2020 and running in October of 2021 due to the pandemic. With such a special event at the end of the road, you might think I’d have been eager to arrive as quickly as possible, but as is often the case, this trip was more about the journey than the destination.

With the sun shining brightly overhead, I watched Munich quickly disappear in the rearview mirror as I had my first opportunity to put the BMW M850i xDrive Gran Coupé to the test. I used to dream about driving exotic cars on the open stretches of the German autobahn when I was a young auto enthusiast in the US. So when I eventually made it to Germany and saw the road sign with five angled lines indicating “no speed limit,” it was time to make a few small dreams come true. I am somewhat more mature now and only pushed the BMW 8 Series Gran Coupé for a short stretch once or twice (okay, maybe a few more times), but of course, it was all for the sake of research. 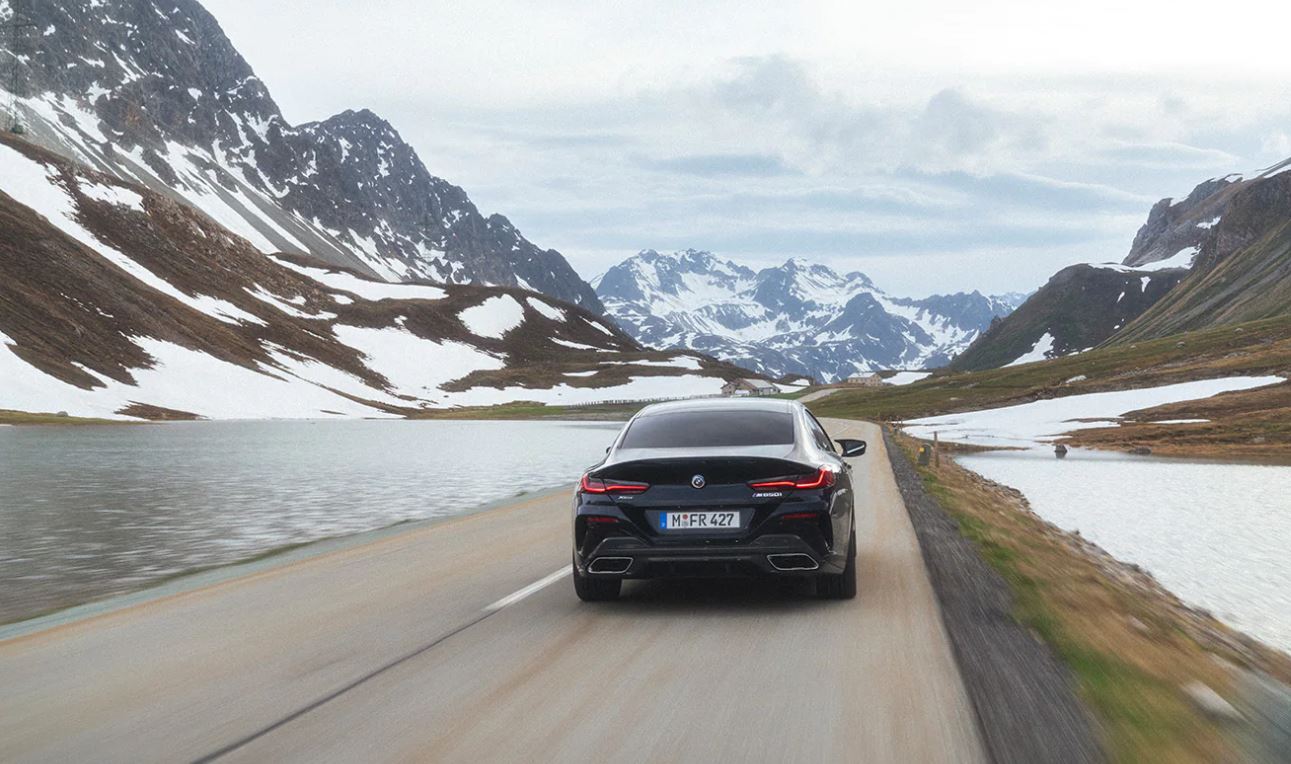 The simple truth is that BMW doesn’t make any slow vehicles, just ones that are slightly less quick. The BMW M850i xDrive Gran Coupé is not one of those vehicles. It just pulls, and pulls, and pulls. I don’t think anyone has quite figured out the art of turbocharging the way BMW has, and that’s clear in the BMW 8 Series Gran Coupé, which can add digits to the digital dash in the blink of an eye. Having a vehicle that can consistently stir your emotions in such rapid fashion is one of the great marvels of the modern era. I repeatedly said to myself on this trip, “What a way to travel,” and I get a genuine kick out of the fact that a car so packed with creature comforts can also be purely entertaining to drive on some of the most spectacular roads ever constructed.

Once I’d reached the terminus of the autobahn in Garmisch-Partenkirchen, all I had to do to maximize the fun factor was go into the navigation settings with the iDrive, select “Avoid Tolls” and “Avoid Highways,” and look for the route option with the most curves. I chose a slightly different path than my fellow travelers, opting to go through St. Moritz so I could lay eyes on Lake Silvaplana. Little did I know that the “official route” would take us over the Julier Pass the following day and I would have seen the whole valley anyway.

I have zero complaints about driving such a great road twice. I am even grateful to have arrived at our hotel from the south, as the scenery was completely different than what followed the next morning as we exited town to the north before looping back to give Julier Pass another go. With the bright, energizing light of morning instead of the soothing glow of twilight, the curves and straights of Julier looked much different and my attitude behind the wheel was quite changed as well. 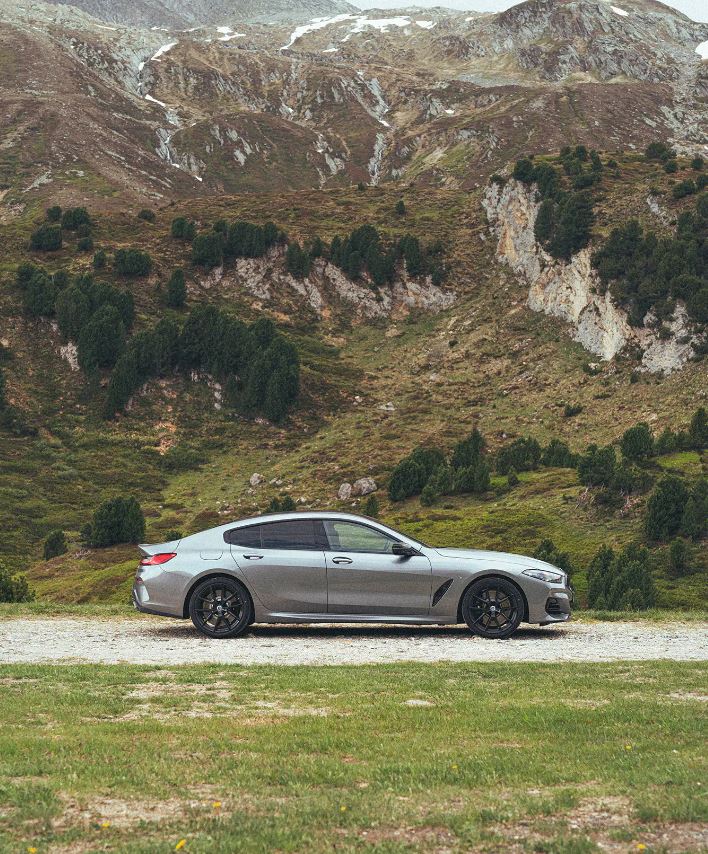 It was then that the abilities of the BMW M850i xDrive Gran Coupé impressed me most, and my admiration grew as I made quick work of the iconic Maloja Pass before crossing into Italy. You’d be hard pressed to find a better way to shuttle three people around the Alps in utter comfort while one person gets to entertain themselves behind the wheel. On these trips, where there is so much to see and so little time to see it all, my goal is to get as many new perspectives as possible. I certainly came away with a different impression of the BMW 8 Series than I had going in.

Walking among so many classic M models later on the grounds of Villa Erba at the BMW “Wheels & Weisswürscht” event added a great deal of context. The collector and enthusiast passion for the brand was on full display: From multiple BMW M535i (E28) vehicles to the M3 CSL (E46), many BMW M2 models, and a BMW M635CSi, the love of “The Ultimate Driving Machine” was palpable. However, walking among classics can only provide so much context for really understanding and appreciating the brand DNA; to do this, you have to get behind the wheel of a couple of icons. Luckily, this is exactly what I was able to do as my stay at Lake Como also offered me the taste of a few of the forerunners to the BMW 8 Series Gran Coupé…

If you’re reading this, then you surely know why the BMW M1 and the BMW 3.0 CSL are held in such high regard by auto enthusiasts the world over. They need no introduction. Their stories are etched in stone; they are legends.

So, what can I add to the conversation? Simply that, in both instances, the very best of BMW is present and these machines live up to their hype in every way. Driving them during my stay in Italy helped me understand where current BMW vehicles evolved from more so than any other classic BMW I’ve been fortunate enough to get seat time in. 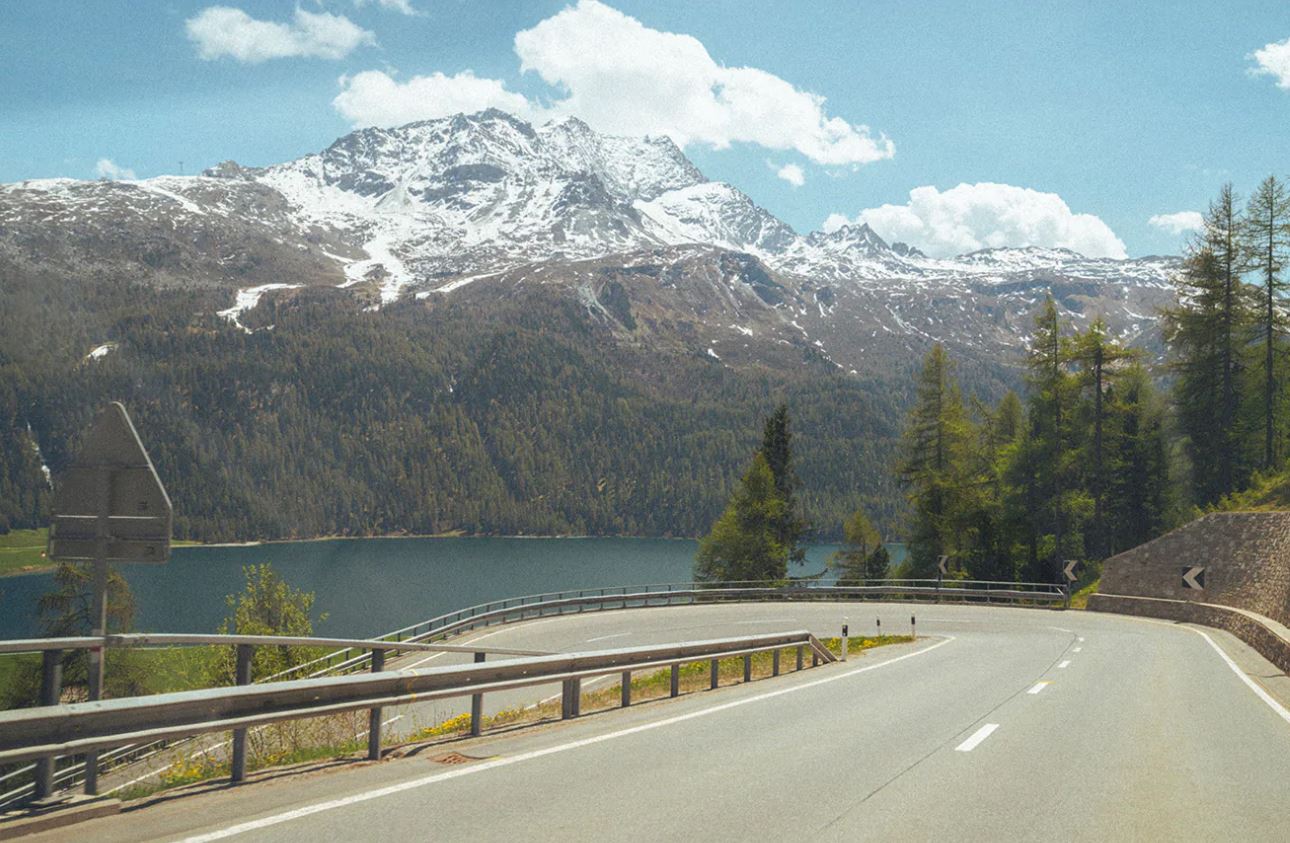 The BMW M1, intimidating as it may appear, is a real peach. As long you’re familiar with a dogleg manual gearbox, it’s easy to drive, (even through tight Italian streets) and completely envelops you in a way that few cars can. It appropriately draws all kinds of attention, especially with the natural white paint the example I drove wore. It’s pure Giorgio Giugiaro design excellence and, revving the inline-six out along the shores of Lake Como, I got the feeling that people were just as shocked to see it now as they would have been back in the late 1970s. It’s a shame that history unfolded the way it did and the BMW M1 wasn’t given a true chance to succeed as a production car or as a race car, but I suppose that all feeds its status as a highly desirable car for collectors.

And then there’s the BMW 3.0 CSL. I don’t have a long history with this car. The BMW M5 vehicles (E34 and E39) in the early aughts initially made me a fan of BMW models from the 1990s. I didn’t know a thing about the BMW 3.0 CSL until roughly a decade ago when a friend pointed one out to me at a “Cars & Coffee” event in Los Angeles. Now that I’ve driven what’s probably the most desirable example, a 1973 BMW 3.0 CSL “Batmobile,” I get why this friend was so over the moon when he spotted that one all those years ago. It represents all that BMW was, is, and hopes to be, distilled into one lightweight package. With a power to weight ratio of 6.1 kg/hp, it is the essence of what a sport touring car should be. Running through the gears on winding roads, listening to the inline-six sing between 4,000 and 5,600 rpm, centuries-old villas on one side, the glistening lake on the other… it’s the stuff dreams are made of. I knew I’d be chasing this feeling for years to come, and I couldn’t imagine experiencing it again until I’m in back in the driver’s seat of another BMW 3.0 CSL. 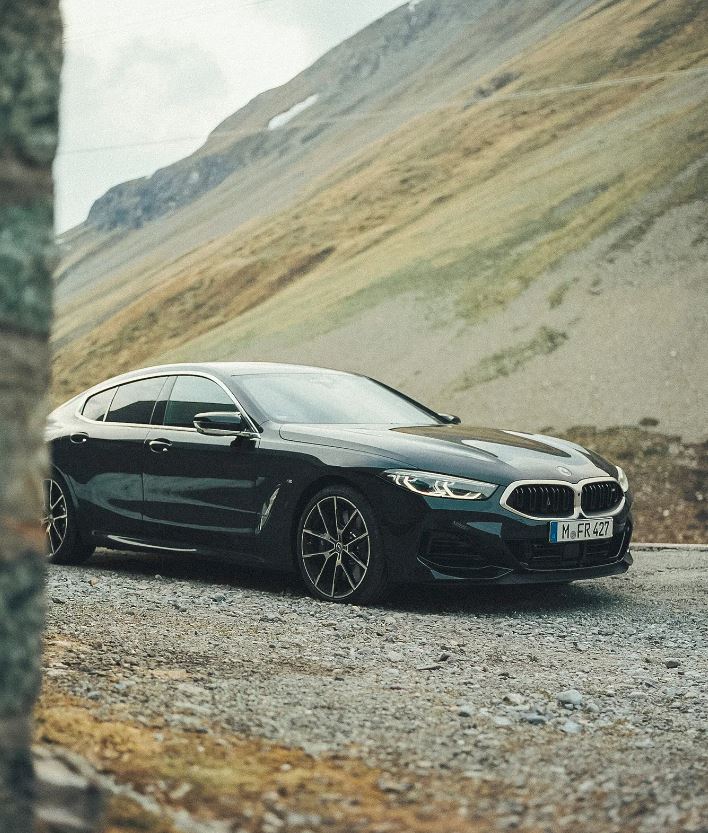 This brings me back to where this story started, the interior of the BMW 840i Coupé, now parked in a valley in Switzerland. When the hail turned to rain and the storm relented, I stepped out into a world so fresh, so clean, and so vibrant that my senses were overwhelmed. How far off was that feeling from the one I’d had behind the wheel of the BMW 3.0 CSL? Honestly, not very far at all. Setting aside all the modern digital tech baked into it, the power figures, the creature comforts, even if just for a minute, the most impressive thing about the BMW 8 Series is that DNA from the iconic BMW cars of the past has been tangibly built into it. Inspired by the original BMW M1 steering wheel emblem, the special “50 Years of M” roundels that the BMW M850i xDrive Gran Coupé and BMW 840i Coupé sported, sure felt much more justified after my experience between Munich and Como. The mountain passes I traversed in Switzerland on the way back to Munich only further solidified my position that there is much to be appreciated in the new BMW 8 Series, especially when you look to the past for inspiration. 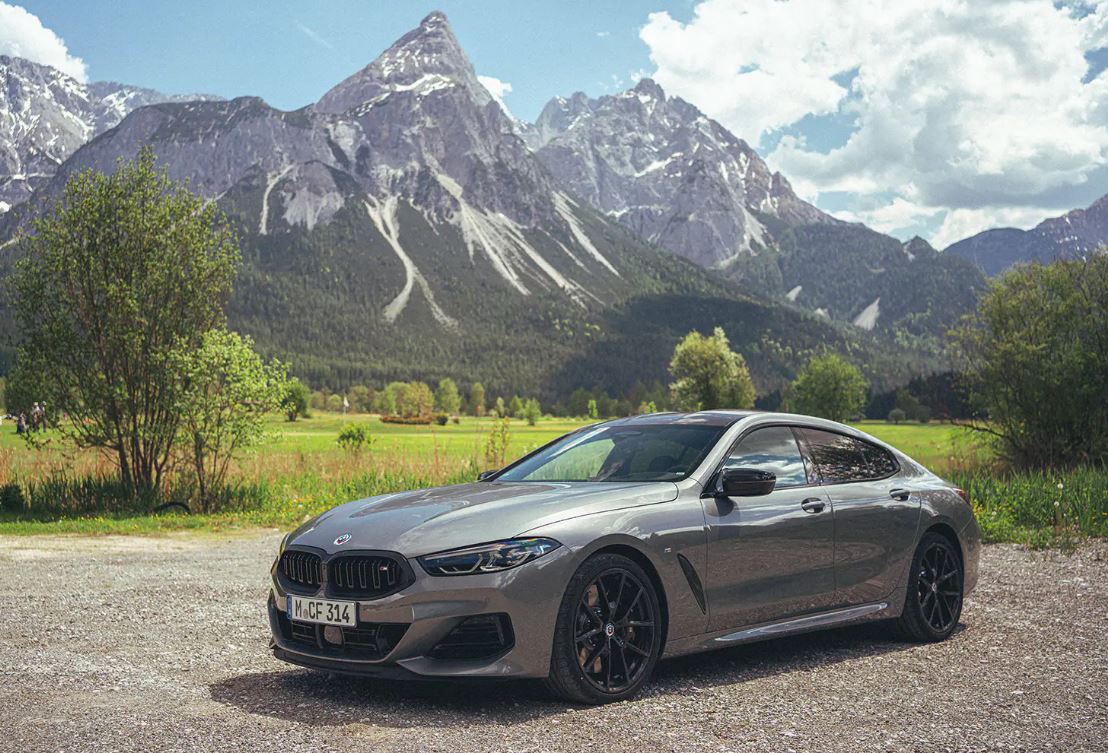