Alpha Auto Group | News | AAG News | Is It The Era Of The Electric Car?

Is It The Era Of The Electric Car?

Governments around the world are accelerating the spread of electric vehicles as they tighten greenhouse gas emission regulations for carbon neutrality. And accordingly, the electrification of global automakers will quickly come true as well.

Governments have increased the scale and level of carbon emission reductions in recent years to be carbon neutral – as necessary to combat climate change. Global automakers are also rapidly promoting electrification. 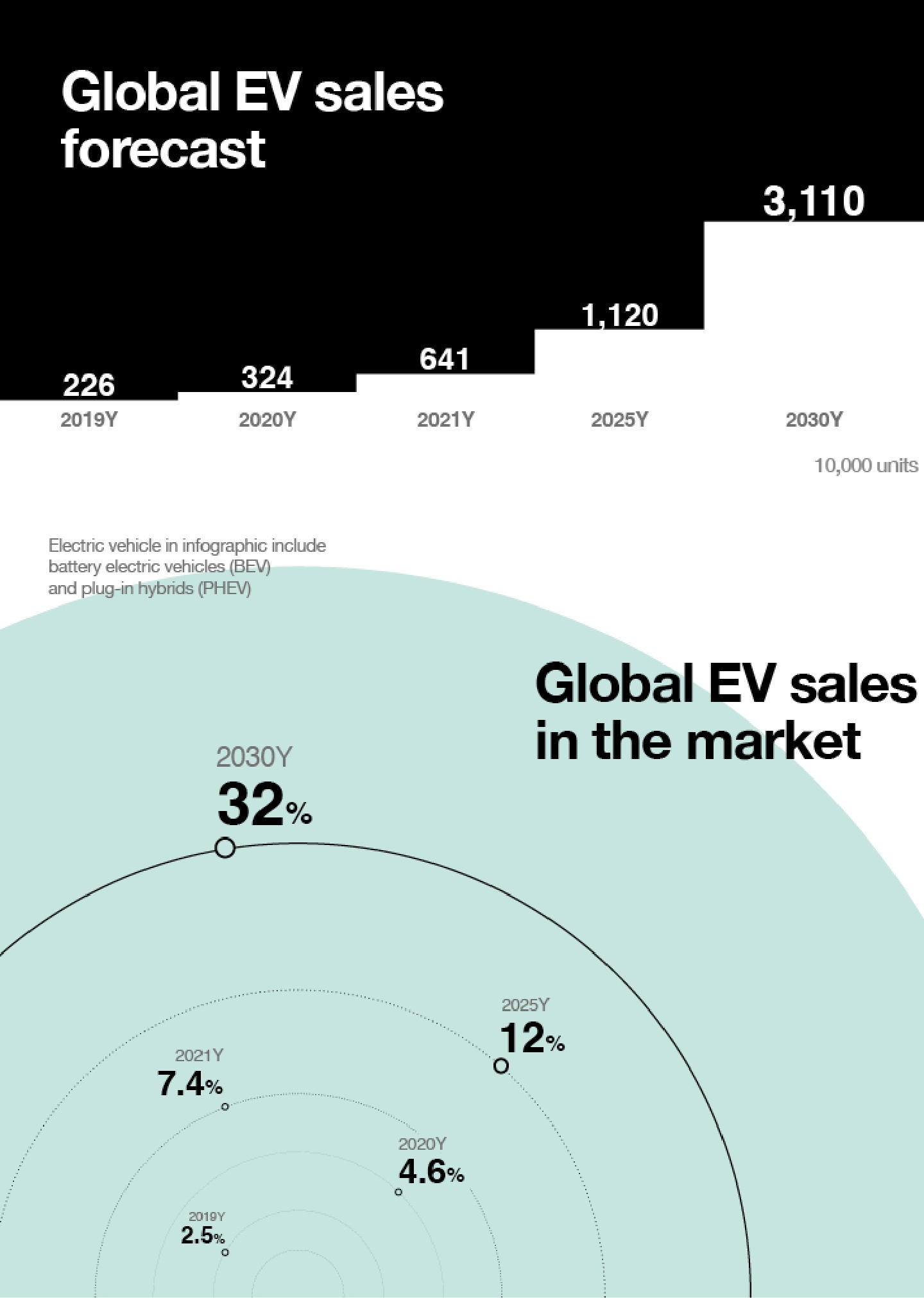 According to energy research firm Bloomberg New Energy Finance (BNEF), to achieve carbon neutrality by 2050, as declared by governments, 60% of all new car sales must be made up of zero-emission vehicles – such as electric vehicles – by 2030. Here is a detailed roadmap of governments and automakers around the world to boost the era of decarbonization and electric vehicles.

Europe: About to be the world’s first carbon-neutral continent 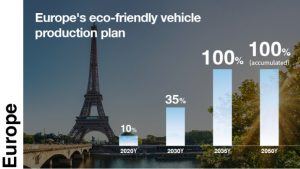 The European Commission has set the goal of becoming the world’s first carbon-neutral continent and aims to reduce greenhouse gas emissions by at least 55% by 2030 compared to 1990 levels. Based on the current carbon emission of 95 g CO₂/km for passenger cars and 147 g CO₂/km for small commercial vehicles, the carbon emission regulation of automobiles will be reduced by 15% until 2025 and will be strengthened step by step every 5 years thereafter. plan. Then, by 2030, the reduction level for passenger cars will be increased from 37.5% to 55% and small commercial vehicles from 31% to 50%. At the same time, by 2030, 35% of new vehicles sold across Europe will consist of only eco-friendly vehicles such as electric vehicles, and sales of new vehicles with internal combustion engines will be completely banned starting from 2035. It will only be possible to sell and distribute zero-emission vehicles (ZEVs) such as pure electric vehicles (BEVs) and hydrogen-electric vehicles (FCEVs) or plug-in hybrids (PHEVs) with low carbon emissions. The plan is to phase out internal combustion engines in Europe after 2050. 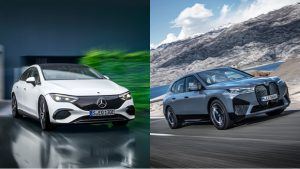 Mercedes-Benz recently revised its electrification strategy from ‘Electric First’ to ‘Electric Only’ and announced a swift implementation plan. By 2022, the automaker will introduce electric vehicles (BEVs) to its entire lineup, and all new cars to be unveiled from 2025 will house one of three electric vehicle-only architectures – ‘MB.EA’, a mid-size passenger car, and ‘AMG. EA’, or commercial vehicle ‘VAN.EA’. Through this, the entire lineup will be converted to electrified models by 2030.

The Volkswagen Group is expected to be decarbonized by 2030 according to the group’s mid-to-long-term strategy New Auto. By 2025, 73 billion euros will be invested in the development of future technologies, mainly in the electrification and digitalization sectors, to develop the integrated architecture mechatronics platform SSP (Scalable Systems Platform) and integrated battery cells. The electric car that houses the SSP is scheduled to be produced from 2026, so that by 2030, half of Volkswagen’s new models will be electric. Audi has set a goal of being completely carbon-neutral by 2050 by phasing out the production of internal combustion engines by 2033, with only electric vehicles expected to be available from 2026.

Volvo is also spurring electrification, starting with its first electric vehicle, the XC40 Recharge, released earlier this year. The strategy is to sell 1 million electric vehicles to the global market by converting 50% of total production to electrified models by 2025. The remaining 50% are hybrid models, and while these will also be reduced in stages, it plans to manufacture only completely zero-emission vehicles in 2030. Through this, the automaker plans to become the first global premium brand with 100% electrification. 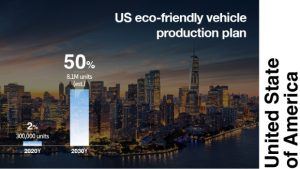 The United States is implementing an eco-friendly policy to reduce carbon emissions to less than half of 2005 levels by 2030. The key to carbon policy in the transport sector is the installation of charging stations. With a strategy of using charging infrastructure to overcome the obstacles to purchasing electric vehicles – the single-charge range -, it plans to invest $7.5 billion by 2030 to install more than 500,000 charging stations. President Biden announced a plan to increase the proportion of electric vehicle sales to 50% by 2030, and plans to pass a bill that subsidizes up to 50% of the purchase price of American electric vehicles. 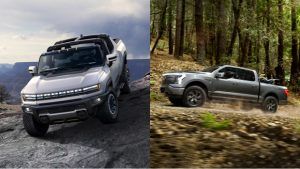 General Motors (GM) plans to increase its electric vehicle market share through the Ultium platform and Ultium battery system exclusively developed for electric vehicles. By 2025, it will invest $35 billion in electric and autonomous vehicles to continue developing the current second-generation Ultium, and based on this, the automaker plans to introduce 30 new EV models. In addition to GMC’s electric pickup truck Hummer EV, the automaker’s other brands – Chevrolet and Buick – will also launch a variety of models next year. In addition, the company announced its goal to raise its electric vehicle production capacity to 1 million units per year and to become the market leader by 2030. In 2035, the automaker plans to produce only electric vehicles in major markets such as the United States and China, and in the global market by 2040.

Ford decided to realize economies of scale through vertical integration to not only survive in the electrification era but also to emerge as the second-biggest manufacturer within two years. Vertical integration means that all stages of work – from production to sales – are carried out through its sub companies. This way, the electric vehicle production capacity will increase to 600,000 units per year within two years, and by 2035, the automaker will be able to sell only electric vehicles in major markets and in the global market from 2040. Ford’s market strategy begins with the electric pickup truck F-150 Lightning, which will be introduced in the first half of next year, and then will add EV models to its entire lineup by 2024.

Japan: A little late for EVs, but catching up with technological innovation 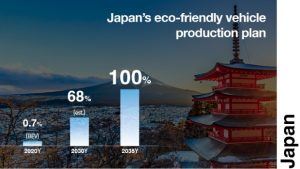 As part of its decarbonization policy, Japan is phasing out sales of internal combustion engines, and has decided to completely ban them by 2035. In addition, it will support the expansion of charging infrastructure to expand the supply of electric vehicles, as well as support the electrification of the current auto parts manufacturers and direct investment. However, Japan’s 100% eco-friendly car conversion includes hybrid cars equipped with both an internal combustion engine and a motor. 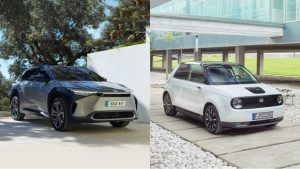 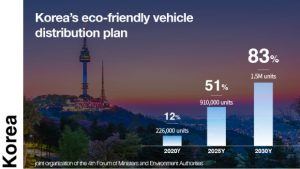 Genesis plans to launch only electric or hydrogen-electric vehicles from 2025 under the ‘Futuring Genesis’ strategy. In addition, it plans to produce a total of eight electrified model lineups by 2030 and expand sales to 400,000 units annually in the global market. As part of this strategy, Genesis recently introduced electrified models of the G80 and GV70, as well as the dedicated electric vehicle GV60. The automaker is committed to becoming a carbon-neutral brand by 2035, not only by electrifying internal combustion engines, but also by reducing carbon emissions across the entire value chain, from raw materials to production. 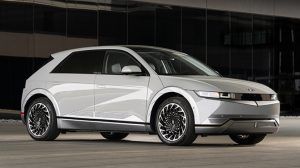 Hyundai Motor plans to increase the proportion of electrified vehicles to 30% in 2030 and 80% in 2040 to become carbon neutral in 2045. Currently, Hyundai is introducing an electric vehicle lineup through IONIQ, a pure electric vehicle brand that applies E-GMP, a platform dedicated to electric vehicles. Following the IONIQ 5, which received a great response worldwide this year, the company plans to launch two new electric vehicles, a mid-size sedan and a large SUV. Back in 2020, the concept car Prophecy was unveiled, allowing people to predict what the second model of the IONIQ brand will look like; And recently, the automaker also announced the electric SUV concept car SEVEN, a large SUV that will be the third lineup of IONIQ at the LA Auto Show. 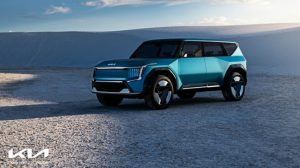 Kia plans to become a sustainable mobility brand through the mid-to long-term strategy ‘Plan S’. By 2027, Hyundai Motor Group will introduce seven new dedicated electric vehicles that house E-GMP, the exclusive electric vehicle platform of Hyundai Motor Group. Starting with the EV6, Kia set a goal of securing a 6.6% share of the global electric vehicle market by 2025 and achieving annual sales of 500,000 electric vehicles by 2026. The Kia Concept EV9, the first large electric SUV concept that was recently unveiled, also shows Kia’s strategy. Through this, the automaker plans to become a truly eco-friendly brand by selling only electrified models from 2035 in Europe and 2040 in major markets.