All About How to Charge Your EV in 10 Easy Steps

By 2023, the BMW Group plans to offer 25 all-electric or plug-in hybrid models. But how do you charge an electric car? What do you need to know about plug types? And where can you find a charging station? Read on for the answers!

1. How and where can you charge an electric car?

The simple answer is that you can do either.

The difference lies in the power given out by the charging station and therefore in how long it takes to charge the electric car. Fast charging uses direct current (DC), whereas most everyday electrical items – from domestic sockets to most public charging stations – work with alternating current (AC). But it’s no problem – EV chargers automatically convert AC into DC. The only issue is that with AC charging you’re limited to an output of 22 kW. A DC charging station, on the other hand, is also known as an EV fast charger because it produces a much higher power output and therefore cuts charging time considerably.

2.How can you find public charging stations – and is there already enough of a charging network?

BMW itself also operates the NOW Venture with other automotive industry partners, including Digital Charging Solutions GmbH (DCS). DCS aggregates public charging systems and already provides private and business customers with around 166,000 AC and DC charging points in Europe (as of spring 2020). It also links up with the IONITY high-power charging network. In European markets, BMW’s public charging offer for xEV customers – BMW Charging – is operated by the familiar NOW venture.

“Our public charging offer, BMW Charging, is integrated into the vehicle environment that customers know and trust. That means it’s no problem to locate a suitable charging station via the navigation system and unlock it with the My BMW App app at any time. We’re also piloting additional functionalities with BMW Charging services. For example, not only can you check, on the go, whether the next charging station that you’re headed for is free, you may also be able to reserve it, depending on the market,” de Boer continues. 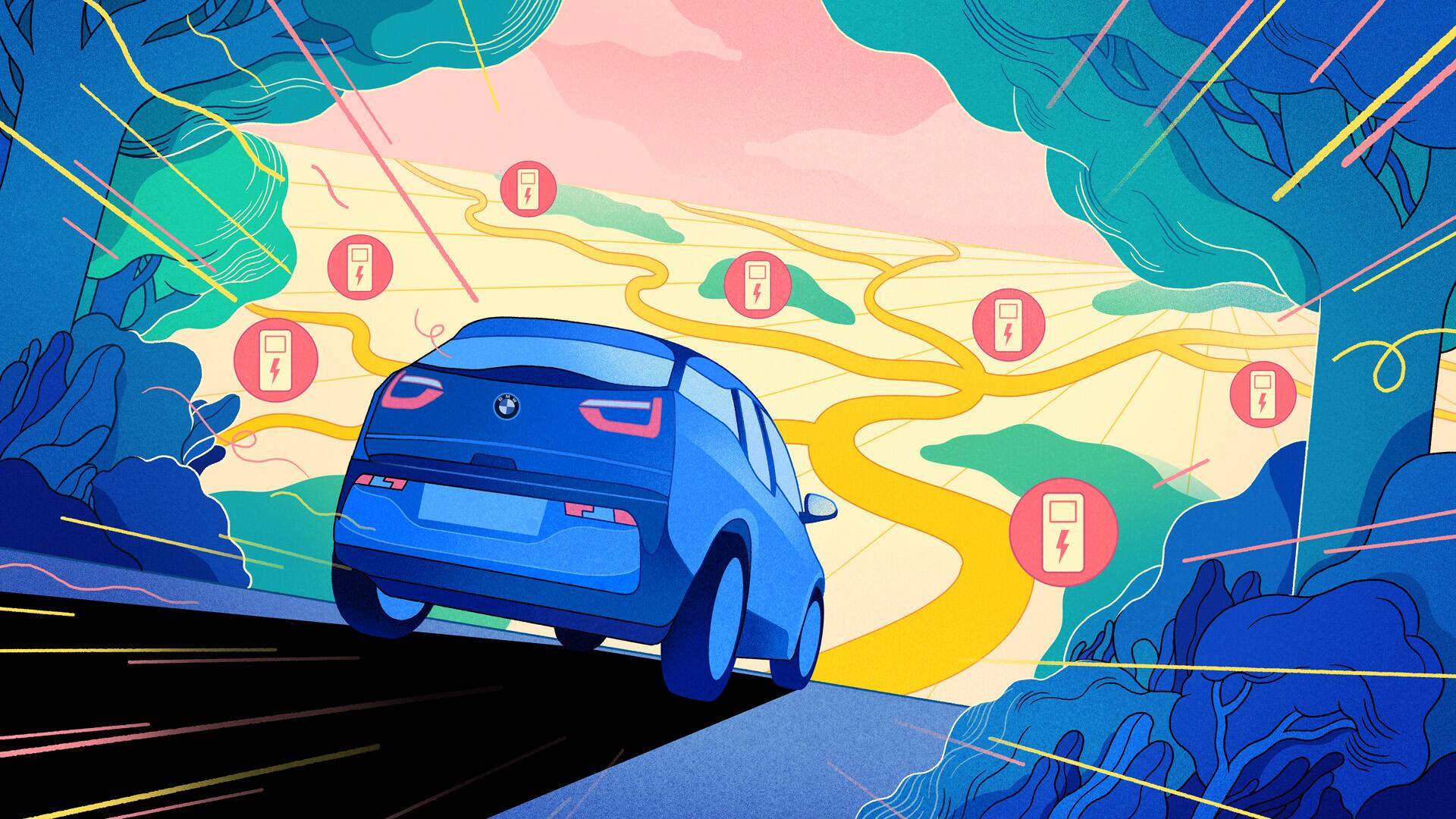 3. What do you need to charge an EV at home?

The easiest and most convenient way to recharge electric vehicles is of course by plugging them in in your own garage. According to various user studies this is already the most common method of charging, and the US Department of Energy states that over 80 percent of EV charging happens at home.

You can, of course, just plug your electric car into a domestic socket at home. How long does it take to charge an electric car? Charging via the regular power grid does take longer, due to the low output of a standard charging cable of 2.3 kW. Instead, you can get a home car charger known as a Wallbox, which is fitted by an electrician along with the appropriate house installation and significantly shortens the charging process thanks to a much higher charging output.

For convenience and quick charging, users of a Wallbox are free to choose their electricity supplier. This also means that financially it is much better than using public charging stations. And last but not least, users can also be sure of proper charger installation by the electric car manufacturer. Many local utilities and electricity suppliers subsidize the purchase of a Wallbox, while tax credits on the purchase of EV chargers are available in the US and many other countries. 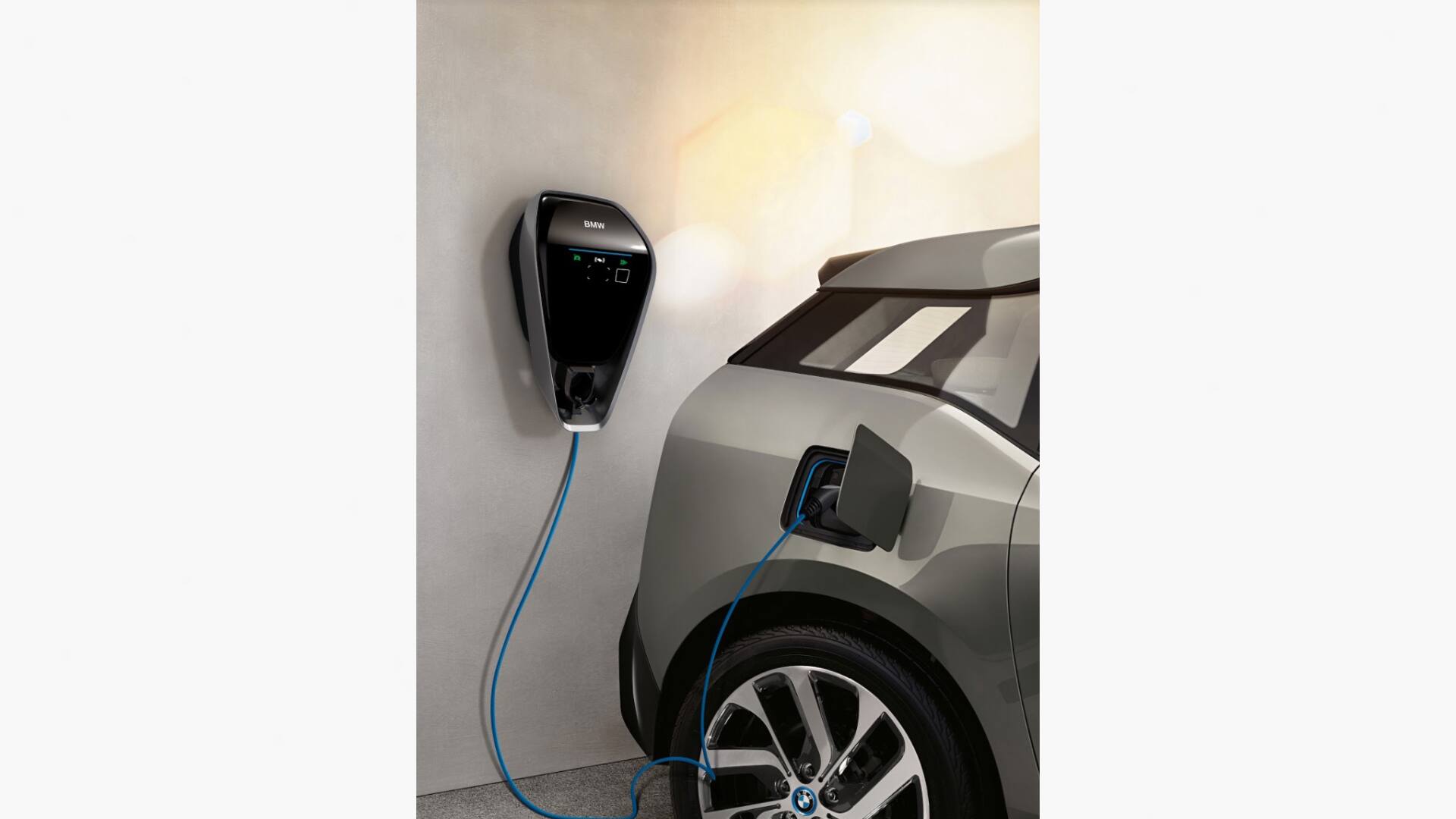 4. How does charging electric cars work?

In principle, it is just as straightforward to charge an electric car as any other battery-operated device: plug it in and the charging process starts. The display in the cockpit or the My BMW App shows whether charging is proceeding according to plan. Once the battery is fully charged again, the charging process ends.

That’s it for the process of charging in your garage at home – and charging at public charging stations is not much more of a hassle. Users generally have to authenticate themselves to the charging station using a charging card or app from the provider in question, and start the charging process by pressing a button.

However, for some time now the providers have also allowed roaming – a term familiar if you’ve ever used your cell phone abroad – so that certain charging cards can also be used to activate other providers’ electric car charging stations. Cross-provider and cross-border charging is also possible via aggregating services, such as that provided by Digital Charging Solutions GmbH (DCS). With BMW Charing via DCS, BMW also offers a convenient public charging service of its own.

5. What’s with all the different types of plugs at electric car charging stations?

Over the years, various different types of charging cables and plugs have been developed for electric vehicles in different countries. The basic home car charger equipment for BMW includes what is known as a standard charging cable that can be plugged into your wall socket at home. For charging at public AC charging stations, on the other hand, a public charging cable (“Mode 3”) is recommended, which is combined with a Type 2 plug for BMW models. This connection – which has become established as the standard in Europe – allows electric vehicles to charge up from public charging stations.

There is not yet any uniform global standard for DC fast charging. CCS1 has become established in North America, while CCS2 has become standard in Europe, and the CHAdeMO and GB/T standards established in Asia. If you happen to be out and about on the highway and you use an EV fast charger, you can leave your own charging cable in the car: every high-speed charging station comes with its own permanently integrated charging cables. EV drivers therefore do not need to carry their own cables. 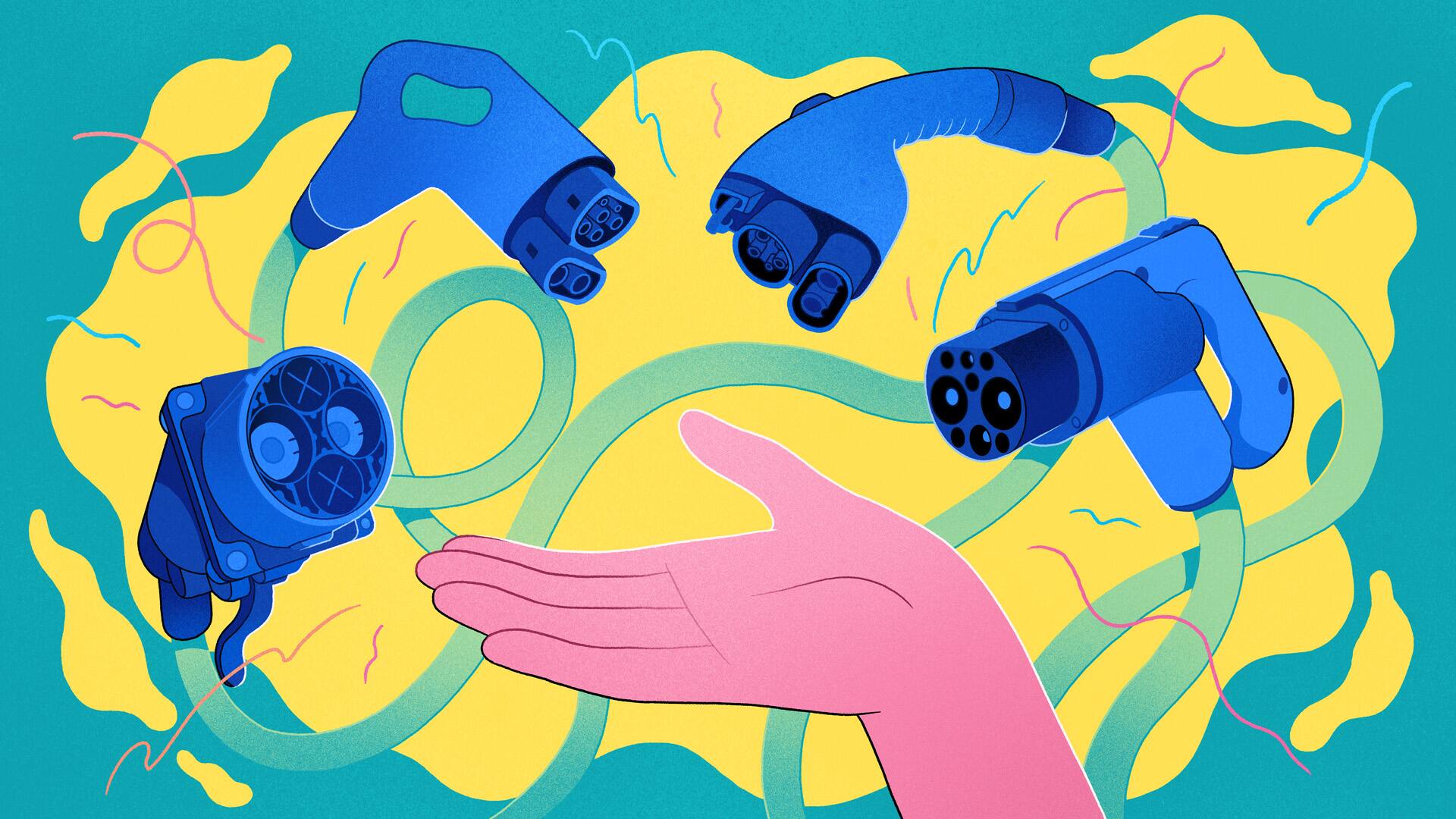 6. How long does it take to charge an electric car and what factors determine the charging time?

How long it takes to charge an electric car is determined by the size of the battery, the maximum charging output – and, of course, how much charge is still left in the battery when you start charging it. The fundamental truth for electric vehicles is that charging with alternating current (AC) generally takes more time than with direct current (DC). As a specific example, a BMW iX3 needs a maximum of seven hours to charge using a Wallbox with the normal charging output of 11 kW. With high-power charging and a charging output of 150 kW, the iX3 can be charged to 80 percent in 34 minutes, according to Tanja Otte-Tillet, Product Marketing Manager BMW Charging.

7. What impact does charging at an EV fast charger station have on the battery?

Fast charging places more strain on the battery than charging at a charging station with a lower power output. There is no need to worry, however, as active temperature management protects the battery during fast-charging, just as battery management prevents the battery from being completely drained. “That’s why it’s important to optimize battery life with intelligent operating and charging strategies,” says charging expert Dr. Karin Krüger.

A QUICK GLOSSARY OF EV CHARGING

The ampere hour (Ah) is a unit of measurement for electrical charge. It is used, among other things, to indicate the available charging capacity of batteries and denotes the nominal charge of a storage cell. In electric cars, the amount of energy that can be stored in the battery is often given as the capacity in kWh instead of Ah to enable different vehicle models to be compared directly.

A battery is a rechargeable means of storing electrical energy electrochemically. The means of storage used in electric cars today are lithium-ion batteries, the price of which is based on the capacity – the quantity of energy measured in kWh.

Plug types: There are various plug standards around the world. The Type 1 plug is standard in the US and Asia, whereas in Europe the Type 2 plug predominates. For EV fast charger stations, this plug type has been extended to form the “Combined Charging System” (CCS) plug. Both plug types are found on BMW vehicles.

A battery’s rated capacity or nominal capacity indicates how much energy can be drawn from it. This figure is given in kilowatt hours (kWh) and describes the amount of energy that is consumed or produced in one hour at an output of one kilowatt. A BMW i3 with a rated or nominal capacity of 37.9 kWh and an energy consumption of 0.21 kW/mile (0.131 kW/kilometer) has a theoretical range of close to 200 miles or 300 kilometers. However, since factors such as driving style, low outside temperatures or a mountainous route profile increase energy requirements in everyday life, a range of up to 160 miles (260 kilometers) is assumed in practice.

8. What does it cost to charge an electric car and how do you pay?

The cheapest way to charge your electric car is of course via your own Wallbox home car charger. This way, you can choose the electricity provider yourself and, where available, select a deal tailored to your specific needs and the specific charging capacity of your car. On the other hand, the cost of using an electric charging station varies. It depends on local electricity rates and the pricing models of individual providers. 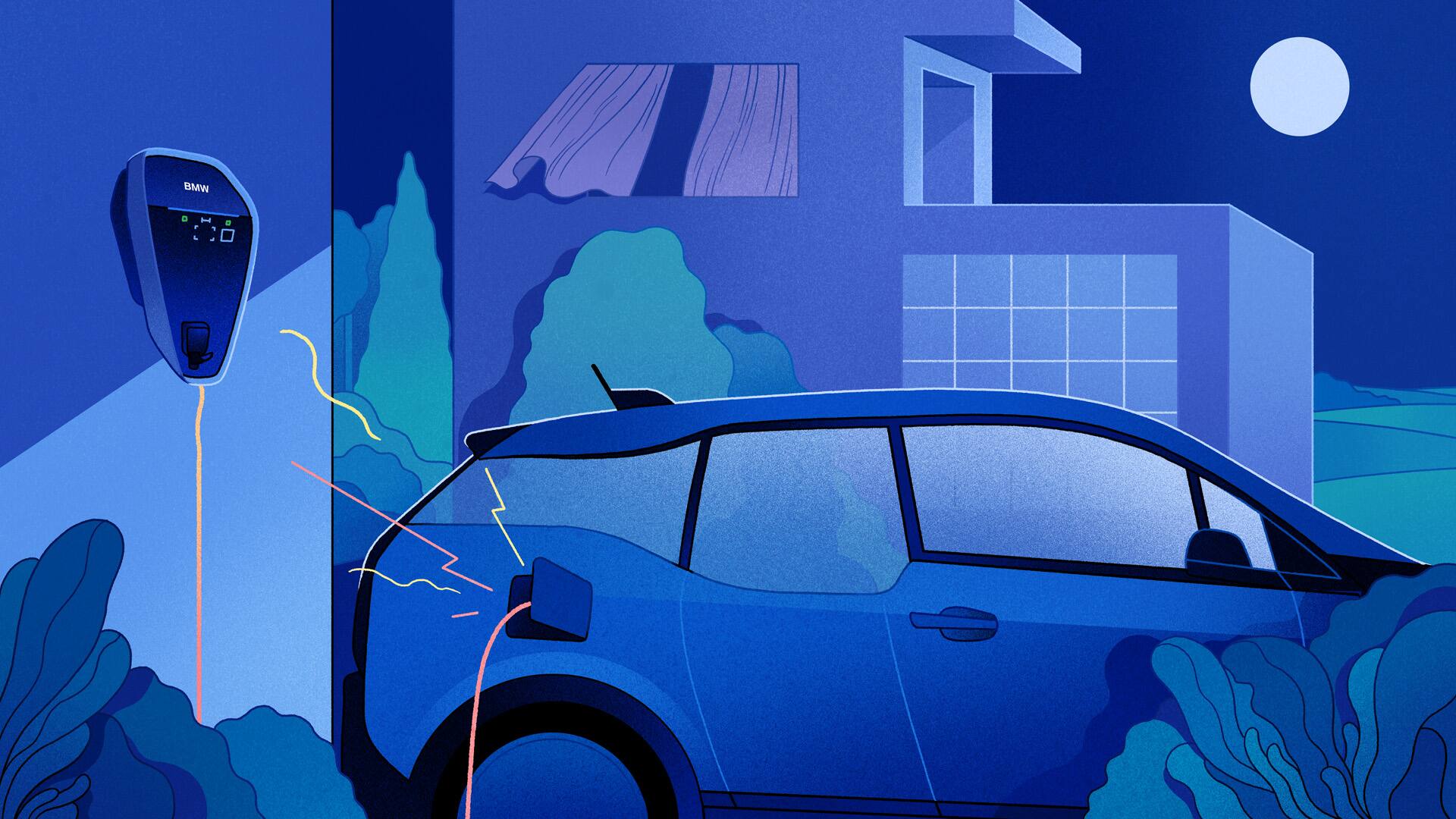 9. What’s the cheapest time to charge an electric car?

Electricity is always available, but the price varies depending on the time of day. “Intelligent charging management is therefore essential,” explains Dr. Krüger, “because the timing of when you plug your vehicle into your Wallbox can make a significant difference to the price.” Many electricity providers offer discounted charging rates if you charge the battery at times of low demand – and perhaps in the process utilize excess electricity from renewable sources at night that otherwise cannot be stored temporarily.

If you’re using public charging stations on the go, you generally don’t get to be so choosy. The most accurate method (and most likely to correspond to the power actually consumed) is billing purely according to the number of kWh consumed. However, there are also providers that bill by the minute and/or that levy an additional time-based fee.

10. How does contactless charging work and is it available yet?

After so much information about the current state of the art for electric vehicles, it’s time to take a quick look into the future – because by then the home car charger and the public charging station could both be obsolete. In the near future it will become as easy to charge an electric car as it is to charge an electric toothbrush or a smartphone on a charging pad today by induction, i.e. the contactless transmission of electricity using an alternating magnetic field. The battery is charged by a primary coil installed in the ground that has its counterpart in the vehicle – this would work in the garage, in parking lots, even on the street.