10 Most Treacherous Roads in North America 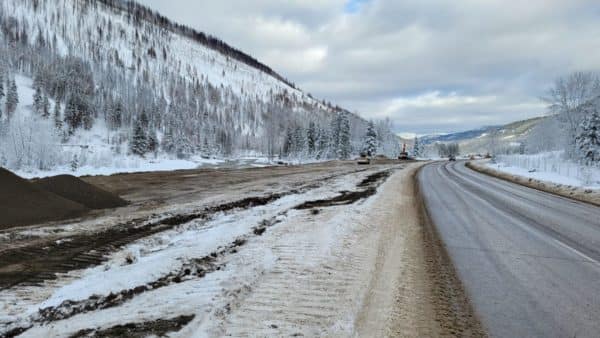 The Coquihalla Highway is a notoriously dangerous freeway located in southern British Columbia. It is part of Highway 5 and is around 200km (about 124.27 mi) long. It is one of the worst roads in all North America during the winter due to many kilometers of icy, slick roads that are steep on both ends. Since it is a mountain pass, it is not recommended for inexperienced drivers to traverse during the winter months. There were 32 fatal crashes between 2004 and 2013 according to ICBC (Insurance Corporation of British Columbia). During most seasons, driving along this road is a breeze, but in winter there are usually no less than 500 accidents. 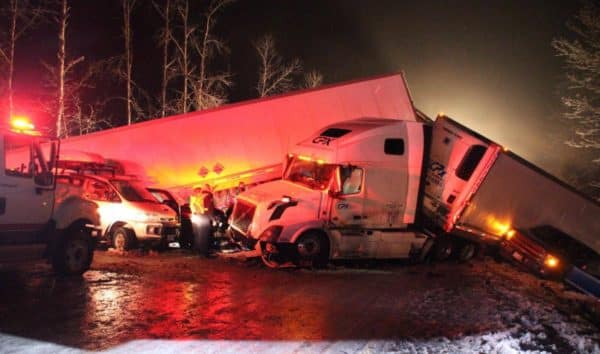 In the latest news, a serious crash involving a semi-truck and four passenger vehicles closed the Coquihalla Highway in both directions on October 29th, 2021. The accident resulted in six people being sent to the hospital, two of them in critical condition, and one fatality. Parts of the highway would remain closed until just last month, January 2022. 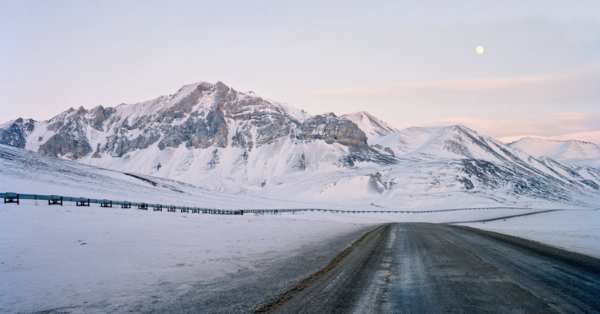 The Dalton Highway is a two-lane gravel road that stretches for 414 miles (666km) to the Elliot Highway just north of the cities of Fairbanks and Deadhorse, near the Prudhoe Bay oil fields and the Arctic Ocean. The Dalton Highway in Alaska, also known as “America’s Loneliest highway”. This route is full of steep curves, winding roads, and not a soul for hundreds o­­­­­f kilometers. Dalton highway is one of the most isolated roads in the world. 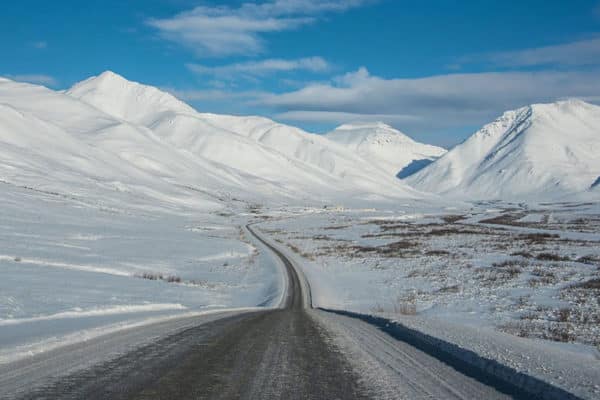 This is not a drive you will do on a whim, as preparedness is essential for a safe trip. Due to the remoteness of the lonely highway, it takes much preparation and special care to ensure that your vehicle is ready for the long and secluded drive. This highway is used mostly by semi-truck drivers and other workers who need to commute between Fairbanks and Deadhorse. The road itself is primitive in many places, steep and damaged, so small vehicle and motorcycle traffic is highly discouraged. 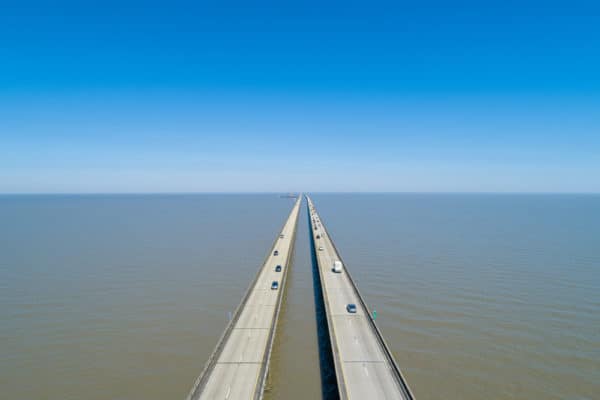 The Lake Pontchartrain Causeway is not for the faint of heart, or those with gephyrophobia. This long strip of divided highway hovers above a lake with a max depth of 20 meters (65 ft) and is the second longest causeway in the world, next to the Jiaozhou Bay bridge in China. The bridge sees approximately 43,000 drivers (about twice the seating capacity of Madison Square Garden) daily, which totals around 12 million visitors to the causeway annually. 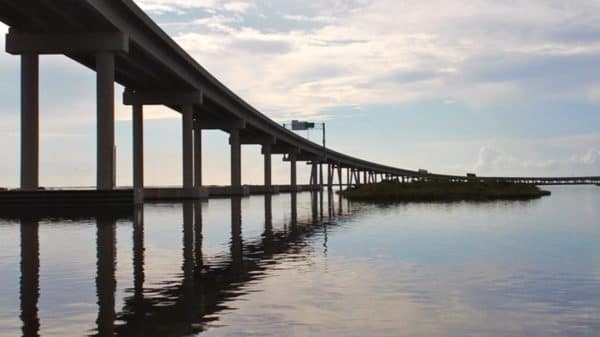 In 2021, there were approximately 93 crashes on the Causeway, and since it opened in 1994, there have been 12 fatalities from drivers going through the barriers and plummeting to the depths below. During the devastating hurricane Katrina in 2005, the bridge flooded and collapsed in many places. It has since been repaired and structurally reinforced.

Kicking Horse Canyon in the providence of British Columbia is one of the most dangerous stretches of road in the country and a key connector between the Prairies and the West Coast. The steep cliffside road sees on average about 5,000 daily, which can climb up to 10,000 vehicles during peak season– of which approximately 20% are semi-trucks. 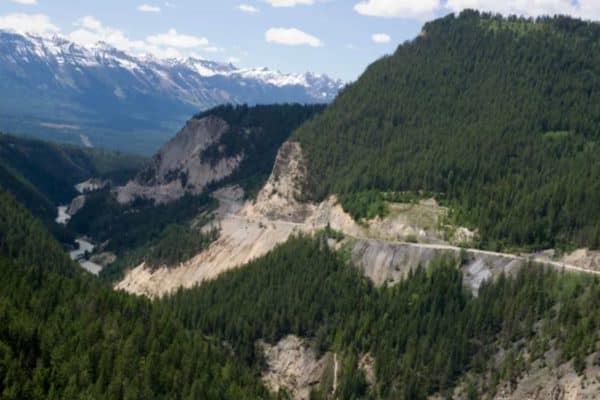 Between the years 1994 and 2005, there were 454 accidents, with 9 of them involving fatalities and 183 resulting in injuries. Its high accident severity and frequency, diminishing pavement conditions, unsatisfactory bridge conditions and poor reliability have made Kicking Horse Canyon Highway a road that is not for those with weak constitutions. 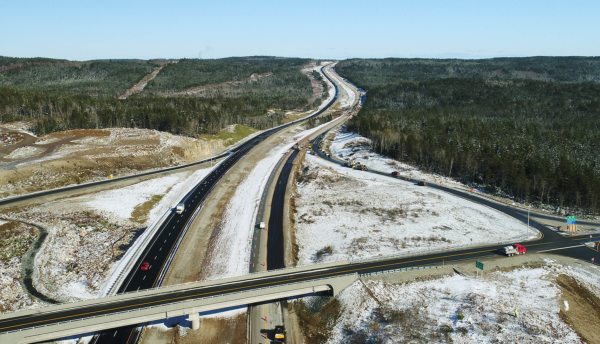 Highway 103 along the South Shore of Nova Scotia has a reputation for being the most dangerous highway in the icy province. According to the provincial Department of Transportation, 29 people lost their lives in crashes on Highway 103 between 2006 and 2009. 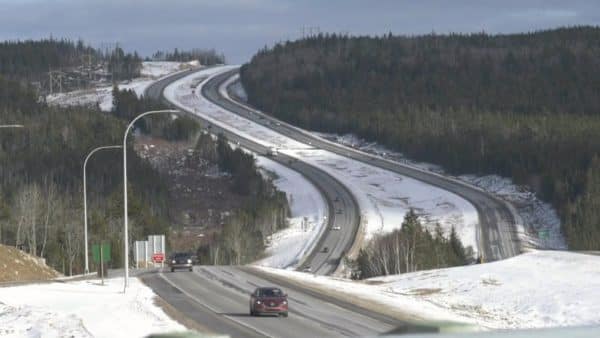 Traffic fatalities on the 103 in Nova Scotia had been occurring at an average of about once a week in 2019 but climbed to 71 fatalities between October and December of 2019. On average, the highways see about 80 deaths a year, mostly during the icy months of winter. Slick conditions certainly make this highway one to traverse with caution. 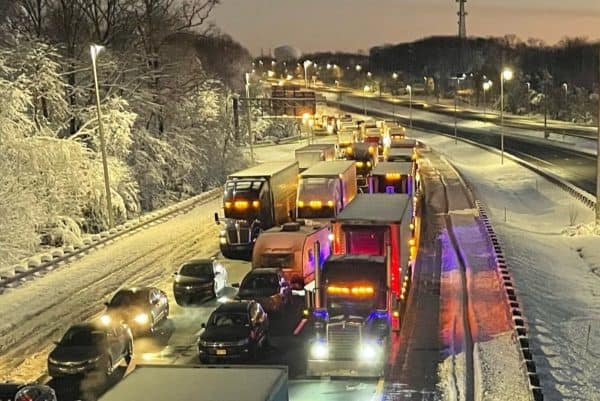 According to NHTSA’s (National Highway Traffic Safety Administration) data, 95 is the most dangerous highway in the United States, with fatalities as a daily occurrence. US Interstate 95 has a reputation for being a dangerous drive, especially during the winter. Vehicle fatalities increased by an estimated 7.2% from 2019 to 2020. 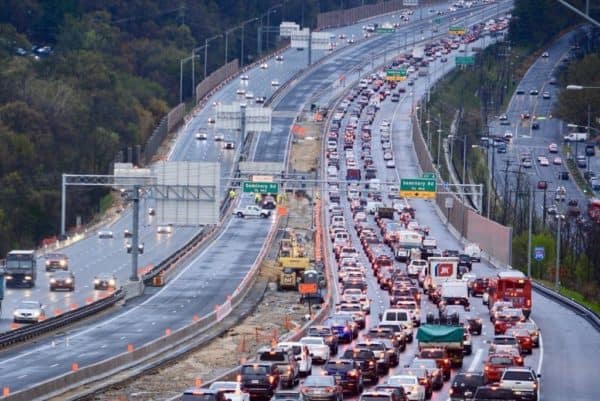 Hillsborough County in Florida had the highest number of Interstate 95 fatalities in the nation, 15 per 100,000 people (about the seating capacity of the Los Angeles Memorial Coliseum). In breaking news early in 2022, the highway shut down during a snowstorm and stranded thousands of drivers in Virginia for over 24 hours. 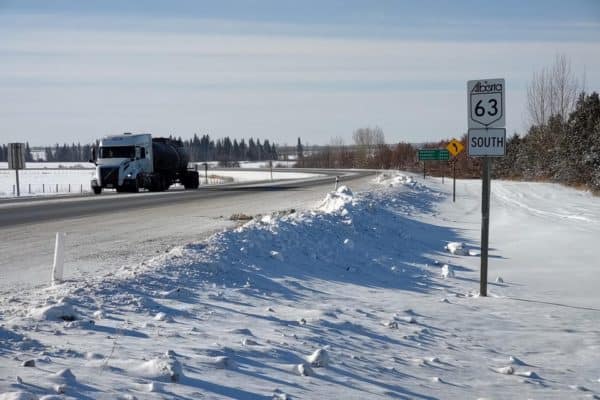 Sometimes referred to as “Suicide 63”, Highway 63 is the only all-weather highway out of Fort McMurray, which makes it a critical passage for the community and creates a significant volume of traffic. Between the years 1990 to 2012, at least 149 people died along the highway; 125 of which occurred between Grassland and Fort McMurray. 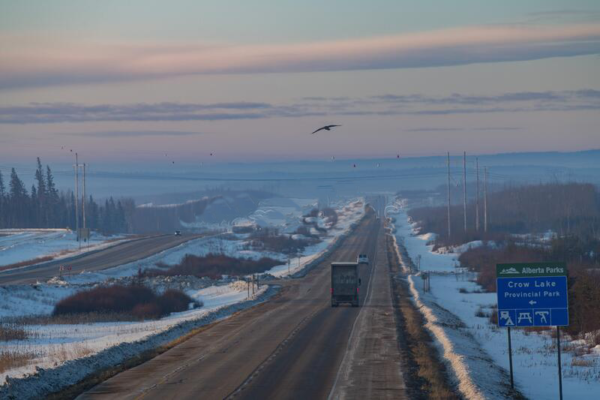 Over just the past five years, 22 people have died and more than 250 have been injured on the 400-kilometre stretch of the deteriorating, narrow two-lane blacktop. This series of fatal accidents prompted the creation of a coalition to increase awareness and encourage safer driving along Highways 63, and others throughout Alberta. 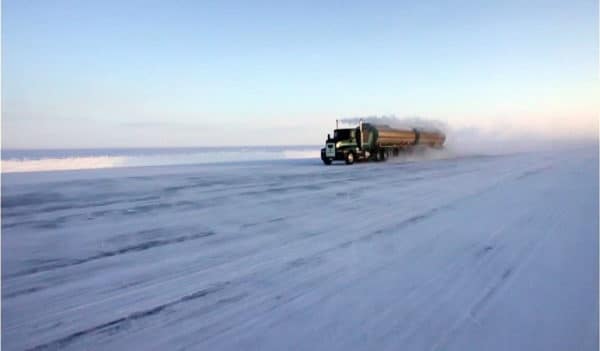 Located in Canada’s Northwest Territories, the road from Tibbitt to Contwoyto is considered one of the most hazardous routes in the world. The main danger is that 85% of the road lies over deep, frozen lakes. 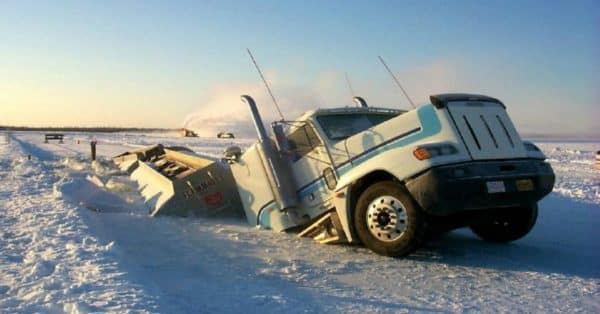 This means that ice can break at any time and devour vehicles into their freezing abyss—so traveling at the perfect time is crucial for each lake to remain frozen enough to bear the heavy weight of traveling vehicles, most of which are semi-trucks. This pass is heavily monitored by biologists, but as weather patterns begin to shift the certainty of this well-traversed passageway’s safety raise questions. 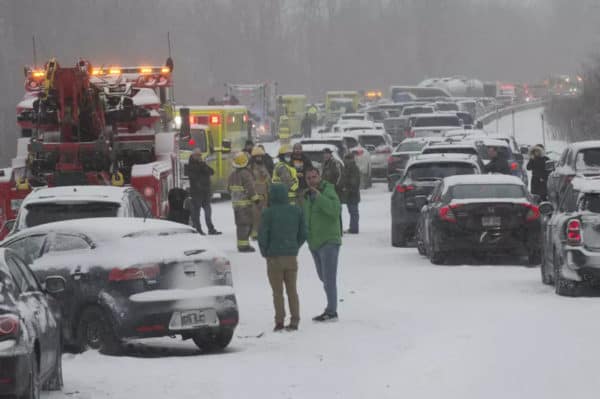 Autoroute 40 is a prominent and scenic route that is also quite notorious for its dangerous conditions. The CAA (Canadian Automobile Association) lists Autoroute 40 in Quebec as one of Canada’s worst highways due to widespread deterioration which has resulted in sections of the road collapsing. 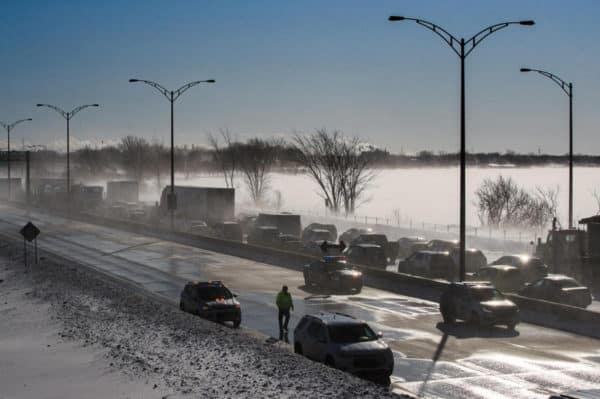 Commonly referred to as Highway 40, the western terminus of Autoroute 40 is located at the Ontario–Quebec border, where it continues as Highway 417 towards Ottawa. In December 2021, there was a massive 150-car pile-up near Trois-Rivieres, causing the highway to be shut down to clear the mass wreckage. Fortunately, there were no fatalities during this incident. 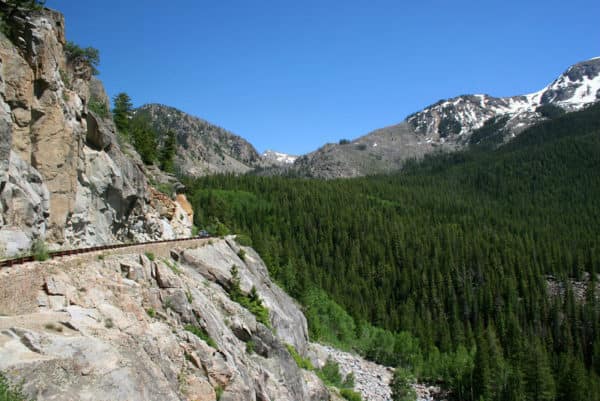 Also known as Independence Pass, this scenic “mini-interstate” from Aspen is not for those who have a fear of heights. Not only is this road the highest paved road in Colorado—approximately 3,700 meters (12,100 feet) above sea level, it’s also full of tight curves, steep drop-offs, and narrow stretches that can fit only one car at a time. 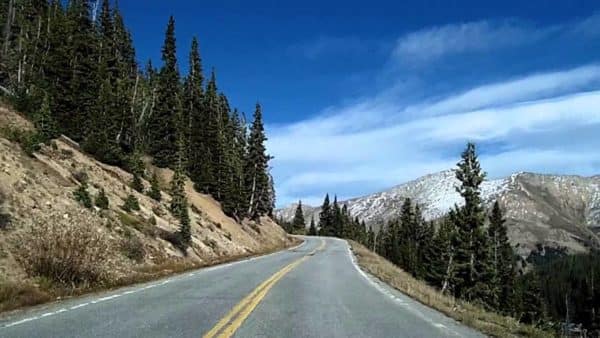 For these reasons, the Colorado Department of Transportation closes the route through Independence Pass each winter. Through 2020 and up to mid-November 2021, a total of 384 accidents have been reported. Between 2019 and 2021, 91 crashes resulted in serious bodily injuries and five fatalities.

Have you driven on any treacherous roads in North America? Feel free to share in the comments below.