Some folks like to get in their cars and hit the road— and some prefer to hit the water instead.
Here’s our list of 8 Amphibious cars you (probably) never knew Existed. 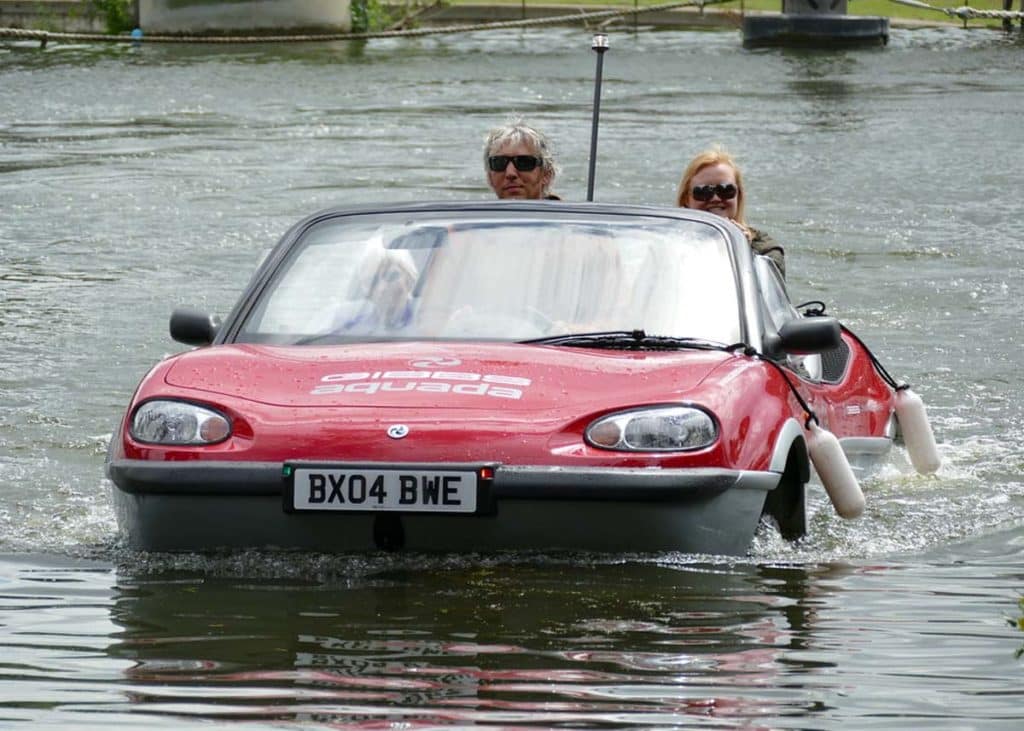 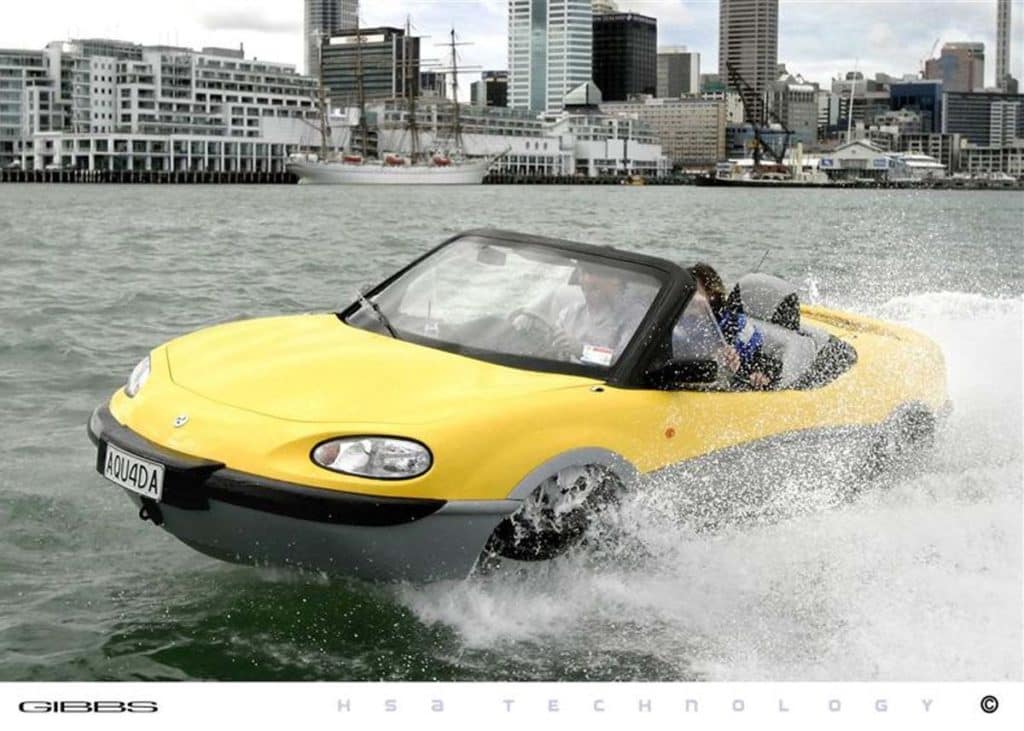 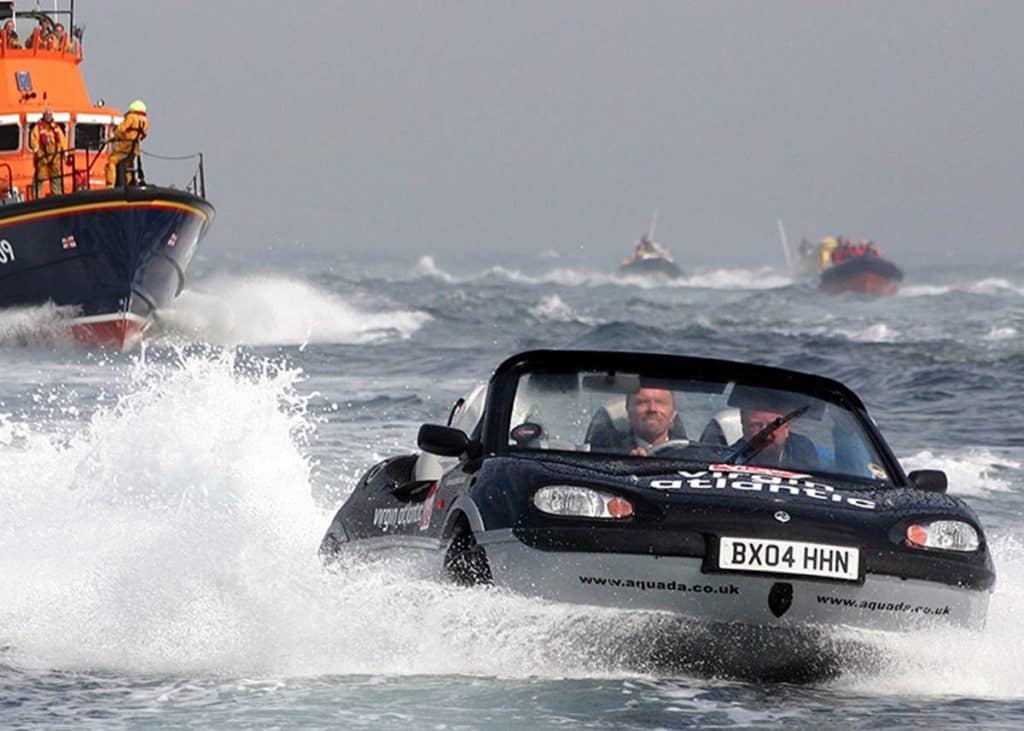 The Gibbs Aquada is the World’s very first High-Speed Amphibious car, capable of over 100mph (160km) on land and over 30mph (48km) on water. This amphibious car is a bit different than previous vehicles listed, due to its innovative retractable wheels. This makes the car handle more similarly to a traditional jet-ski, giving it it’s speedy capabilities. With great performance both on road and water, this incredible vehicle ensures a sensational experience with freedom for a unique traveling experience like none other. Powerful enough to tow a water skier, this unorthodox new breed is a testimony to high-speed amphibious car Technology. Since developing the Aquada, Gibbs has used some of its 350 patents to create a whole fleet of amphibious vehicles. 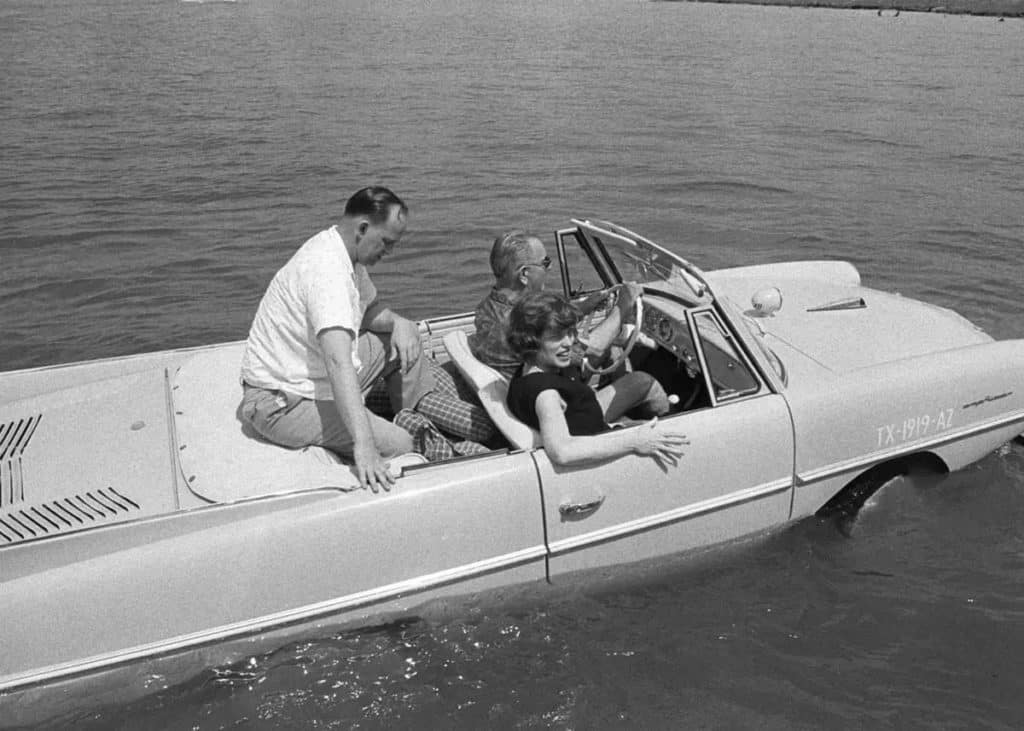 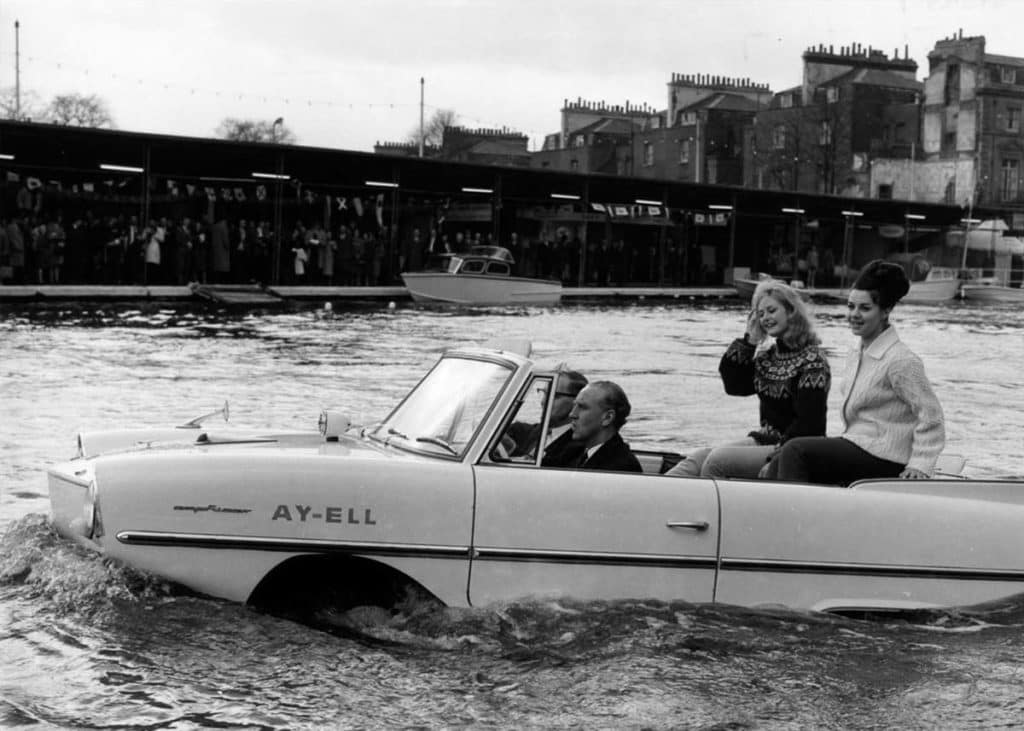 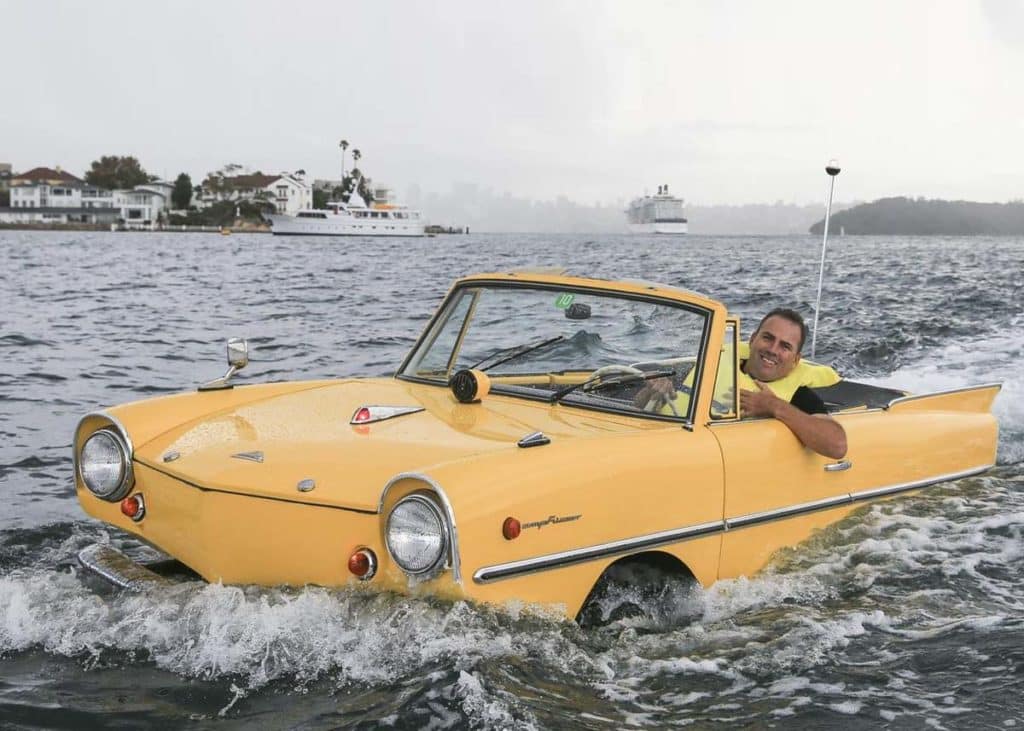 The Amphicar was the earliest amphibious vehicle intended for ordinary North American consumers. First introduced at the New York Motor Show in 1961, this classic beauty sold an impressive 3,878 units before ceasing production in 1968. The vehicle’s power came from a rear-mounted 1.1-litre four-cylinder petrol engine, as found in the Triumph Herald 1200. Power was either sent to the rear wheels while on land, or to its twin propellors mounted beneath the rear bumper when floating in the water. As one of the most popular amphibious vehicles in American history, it easily proved its boating aptitude amongst consumers. The vehicle became so popular in mariner circles, that even US President Lyndon B. Johnson also owned one for family use. The President allegedly got a huge kick out of frightening onlookers by driving onto the lake while shouting “The brakes have failed!” 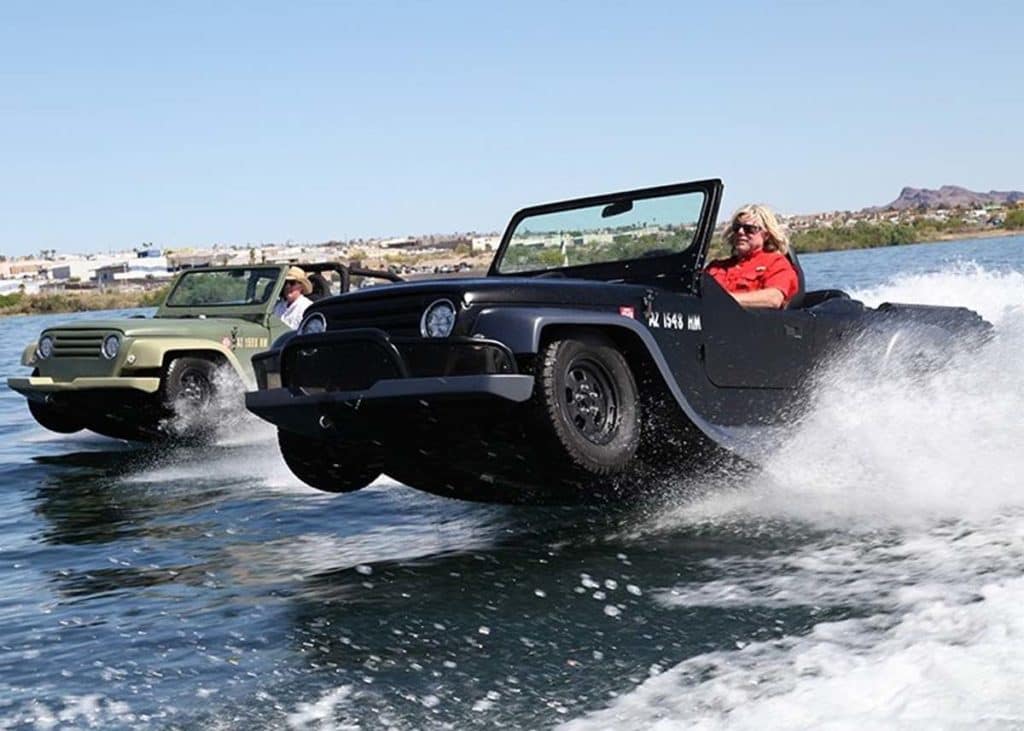 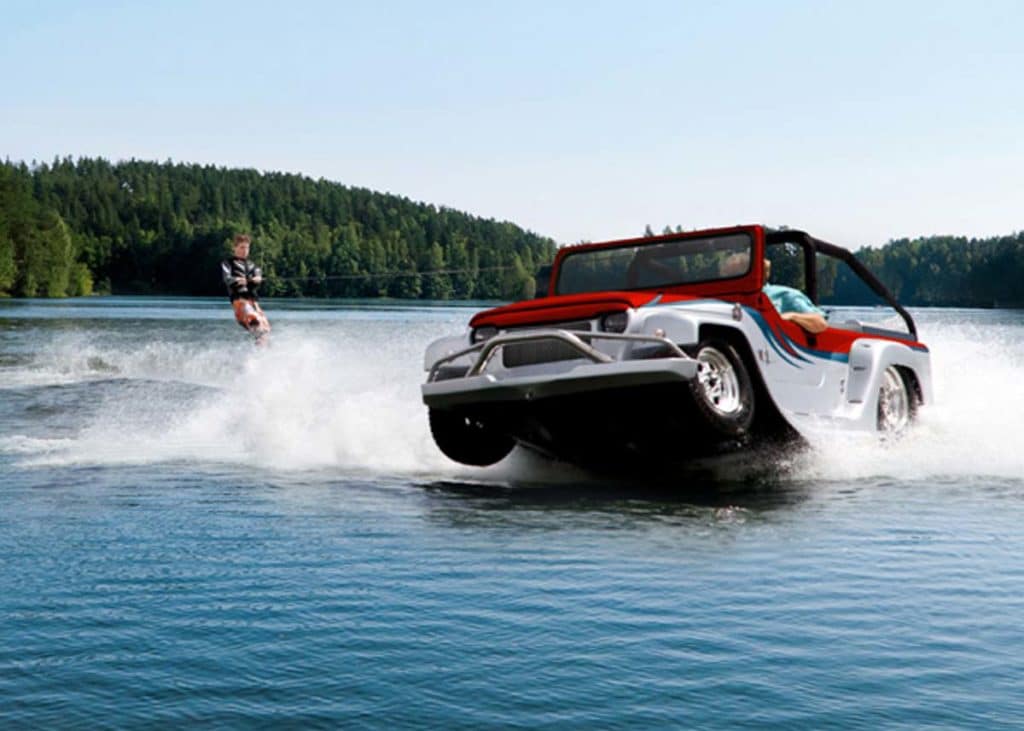 Watercar in red and white 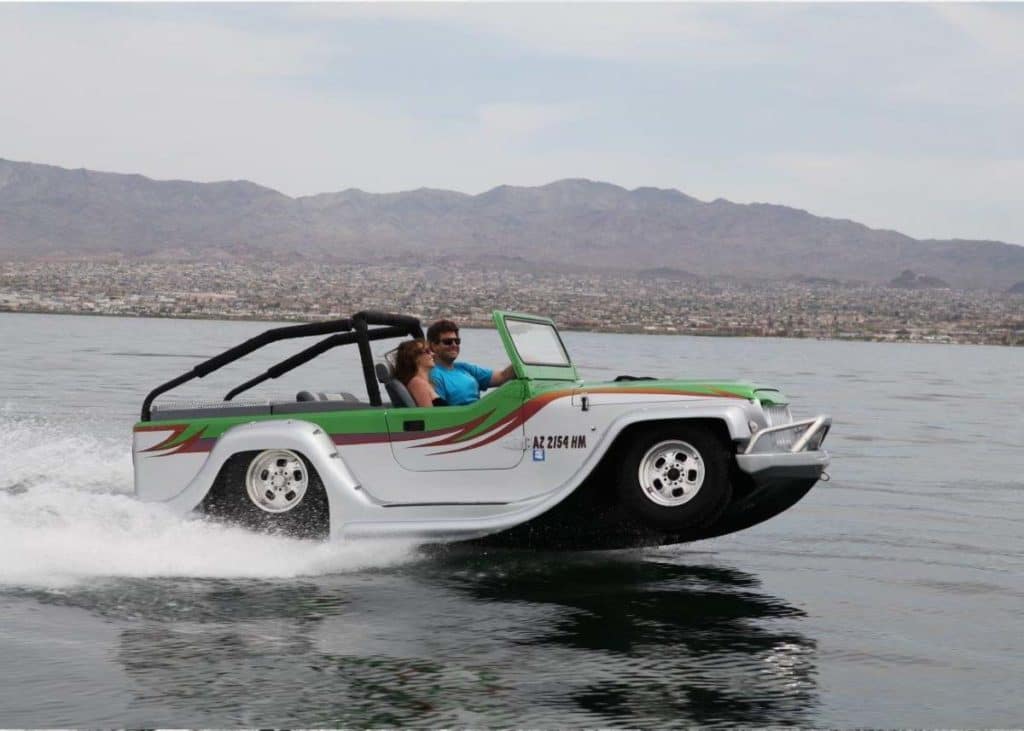 Watercar in green and white

Cleverly named the Watercar, this vehicle holds the Guinness World Record for reaching a top speed of 127mph (204km) top speed on land and 60mph (96km) across the water— making it the fasted amphibious car to date. Similar to the Gibbs vehicles, the Watercar retracts its wheels for when it is submerged in the water, giving it an edge that most other aquatic automobiles do not have. The vehicle’s propulsion comes from a 3.7-liter Honda VTEC V-6 mounted in the rear, driving the rear wheels via a four-speed manual. For water use, a transfer case sends power to stainless steel water-jet system. With a catchphrase like “The Most Fun Vehicle on the Planet”, this extraordinary vehicle delivers. On top of that, unlike many of the other models listed, the Watercar has decreased in price by a few grand, making it just a bit closer to being obtainable for some. 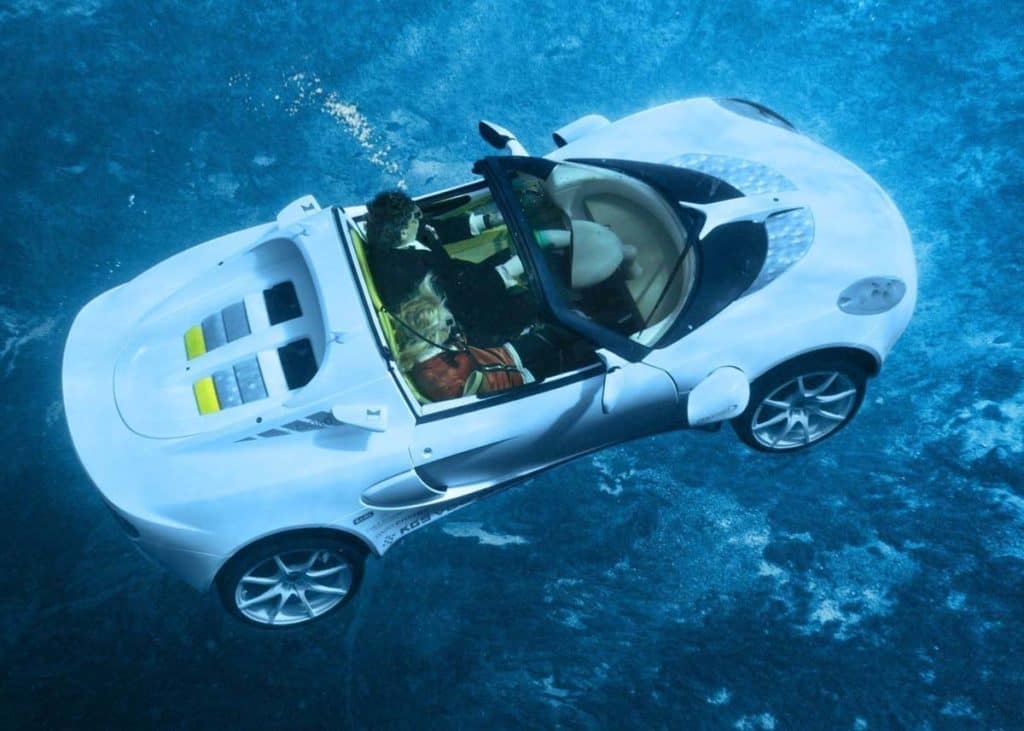 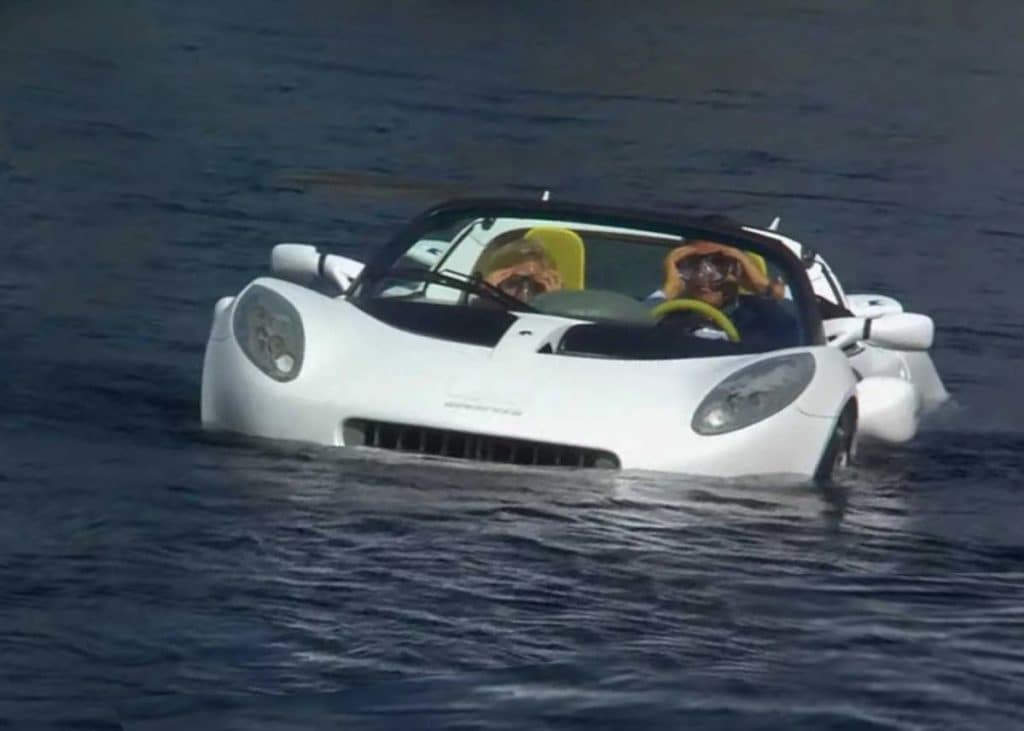 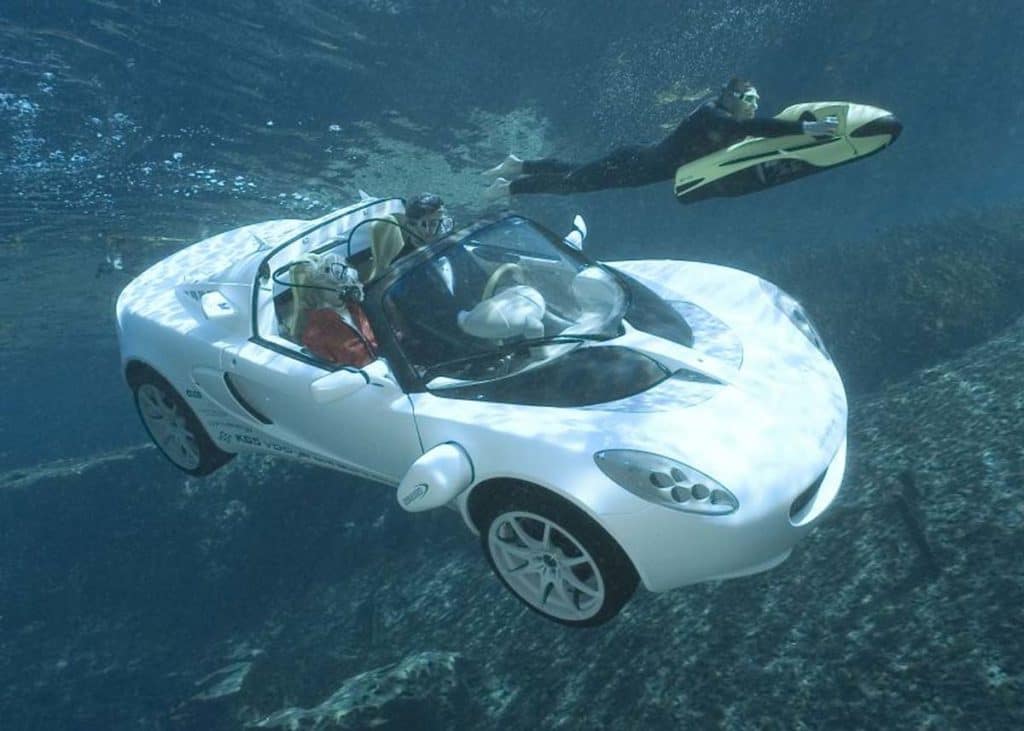 Looking much less like a boat and more like a luxury sports car, the Rinspeed SQuba is certainly an extravagant and remarkable aquatic vehicle. Created by Swiss motorsports vehicle manufacture Rinspeed, this unique vessel was heavily inspired by James Bond’s Lotus Esprit road-going submarine from 1977’s The Spy Who Loved Me. The extraordinary vehicle was motorized by twin electric-powered propellers and can be submerged to a depth of 10 metres, allowing folks to go down with it using scuba-style breathing equipment. The vehicle has a top speed of 75mph (120kph) on land, but slows down underwater to a calm and underwhelming 2mph (3.5kph). 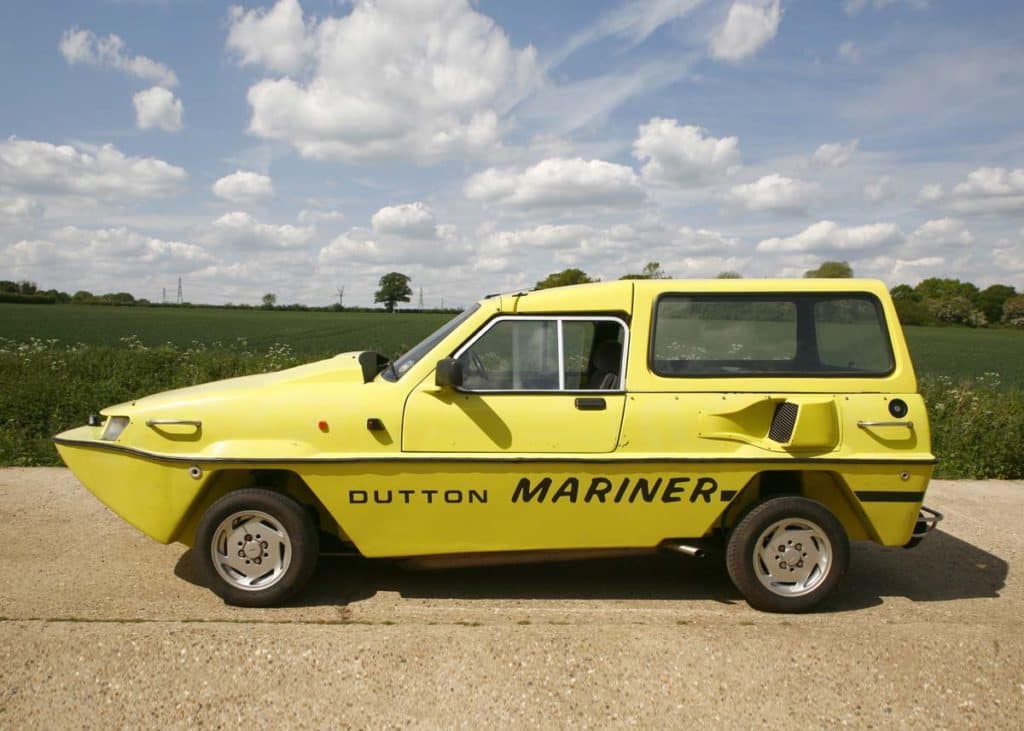 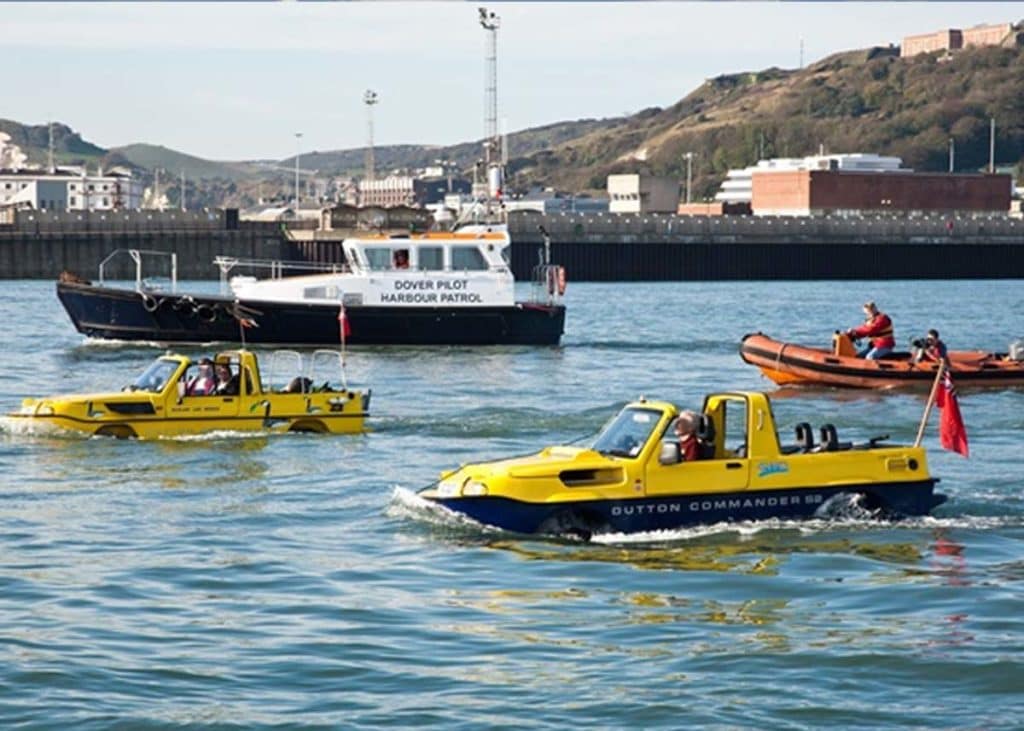 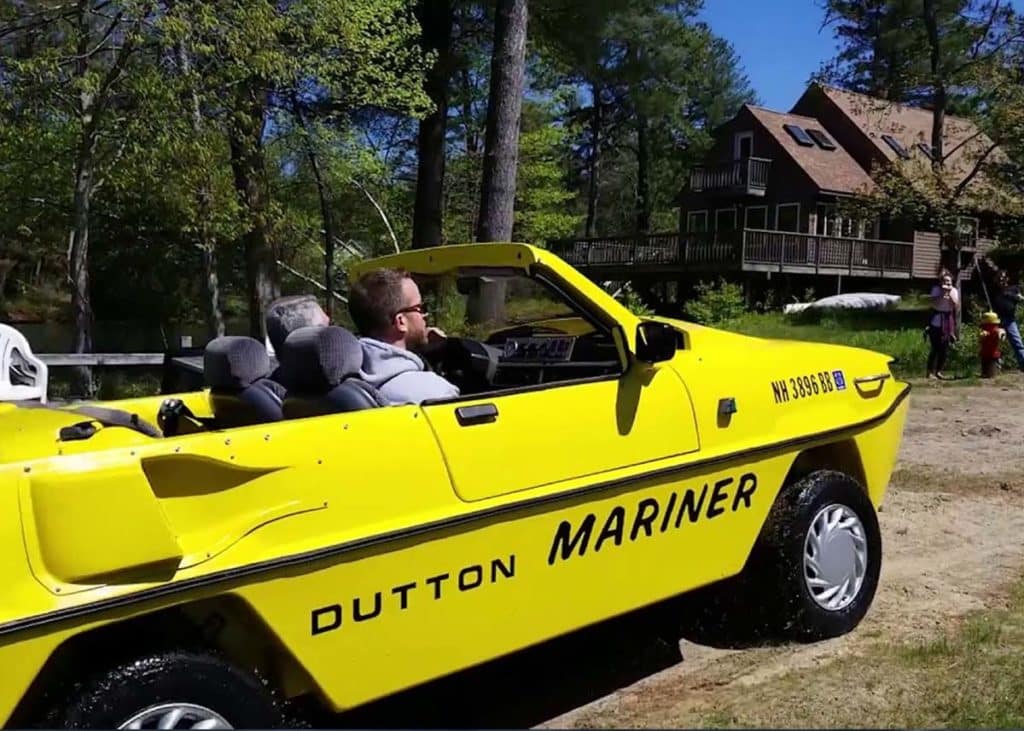 If you’re looking for a unique aquatic experience, look no further than the 1990 Dutton Mariner. This unusual vehicle was built using a Ford Fiesta chassis and was engineered by Dutton Amphibious Cars in the United Kingdom. It is reported to be the one of the earliest commercial amphibious vehicles not exclusively intended for use by the military. The Dutton Mariner features a custom glass reinforced plastic body, along with modifications necessary for operation in a marine environment. The vehicle’s power comes from the factory Fiesta 1.3L inline-four while on land, with a 5-speed manual transmission sending power to the front wheels. Once in the water, the vehicle is propelled by twin hydro-jets which are driven via a belt from the crankshaft pulley. 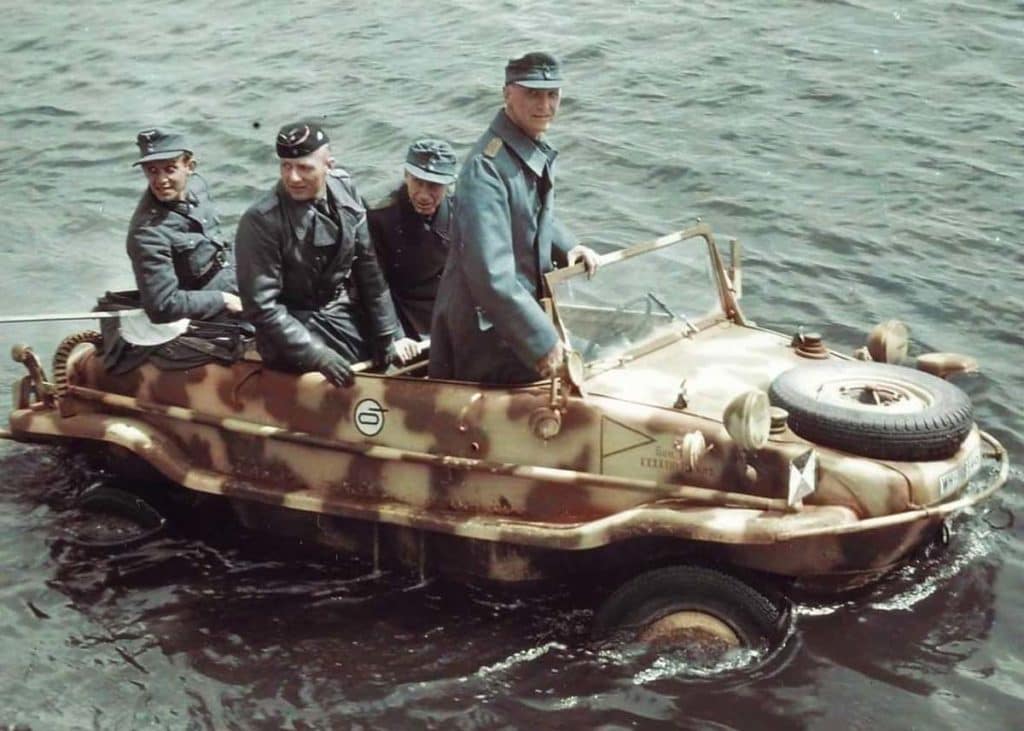 Volkswagen Schwimmwagen during the 1940’s 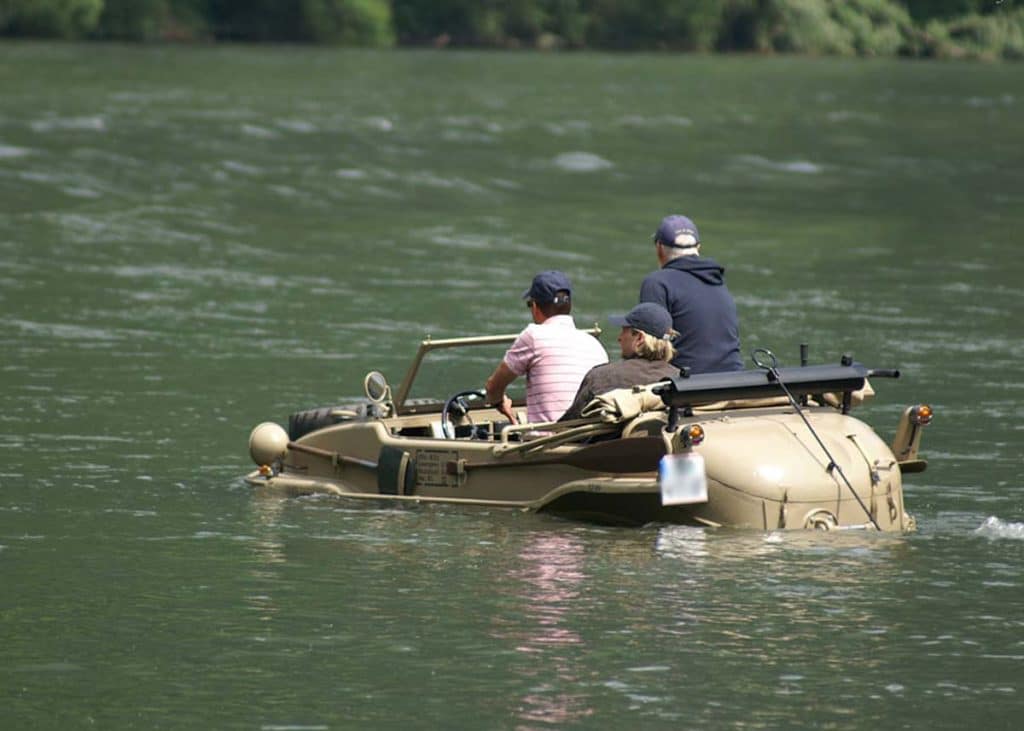 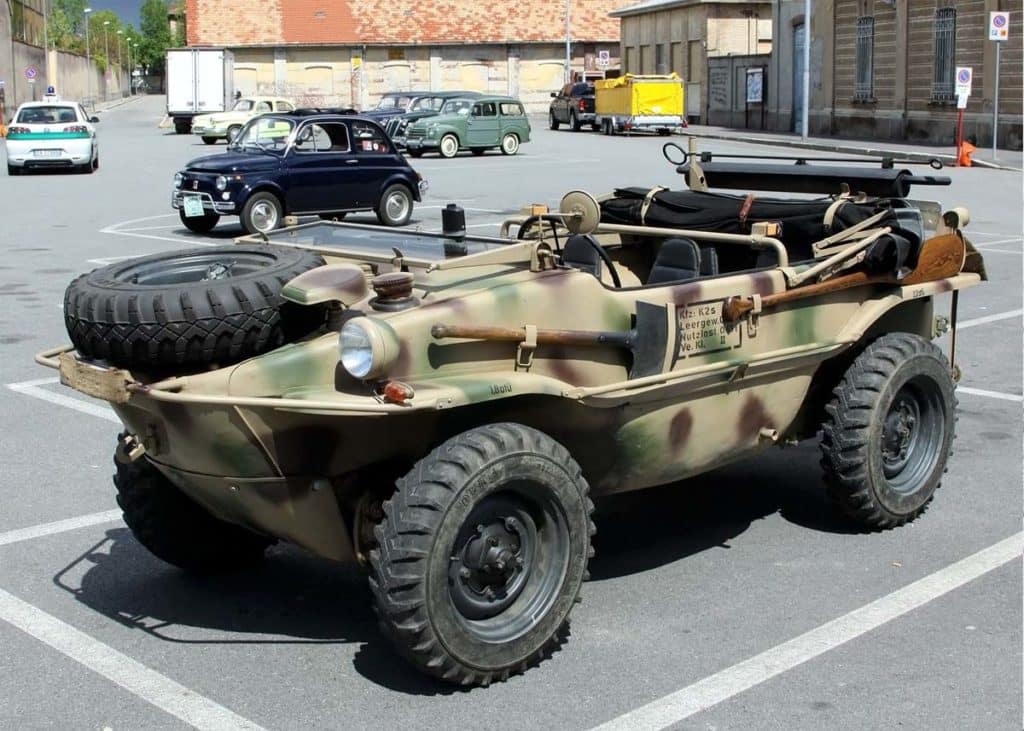 The most heavily produced amphibious car in history was the unforgettable Volkswagen Schwimmwagen produced during World War II. The Schwimmwagens used the engine and mechanicals of the VW Type 86 four-wheel drive prototype of the Kübelwagen (a light military vehicle used during WWII, similar in appearance to a US military style utility vehicle) which in turn were based on the platform of the civilian Volkswagen Beetle. The vehicle was reliable and lightweight. It served for transport, command cars, dispatch, scouting and regular officer cars on the frontline. They were unarmed but proved dependable, sturdy and very versatile. Soldiers sometimes affectionately nicknamed it the “Frosche” (the “frog”). 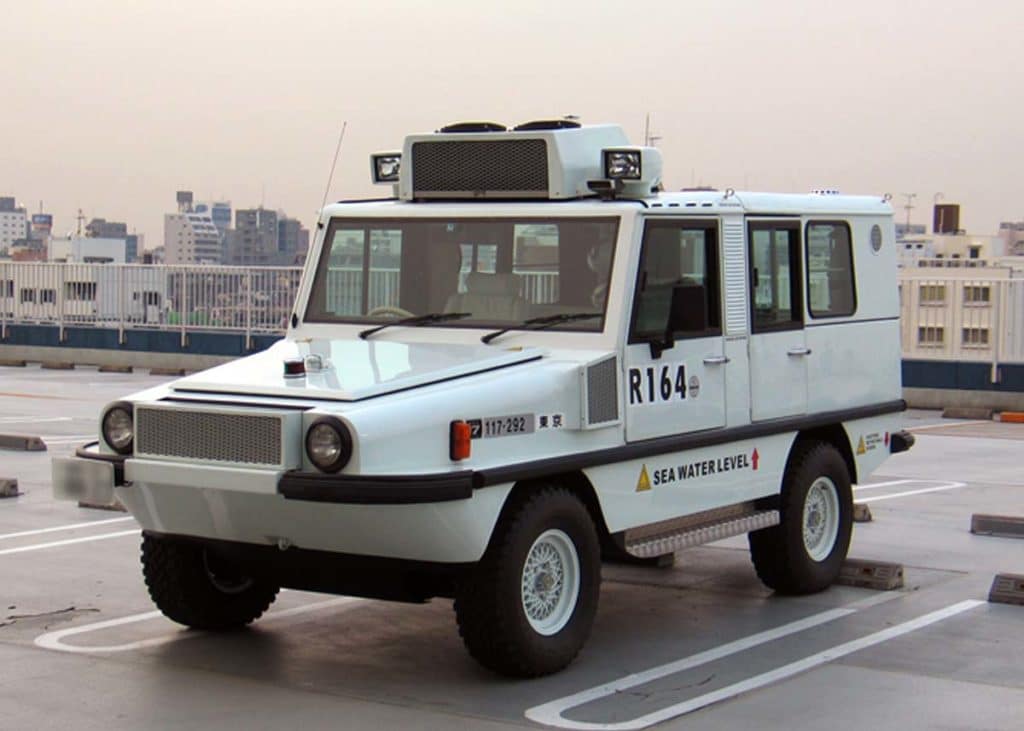 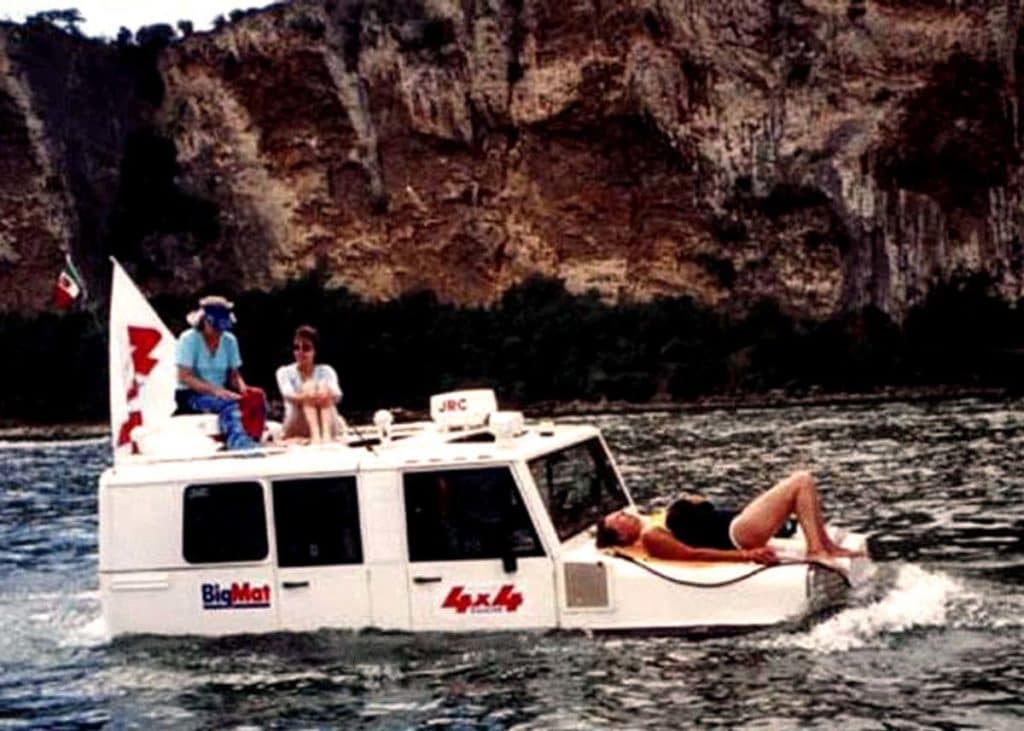 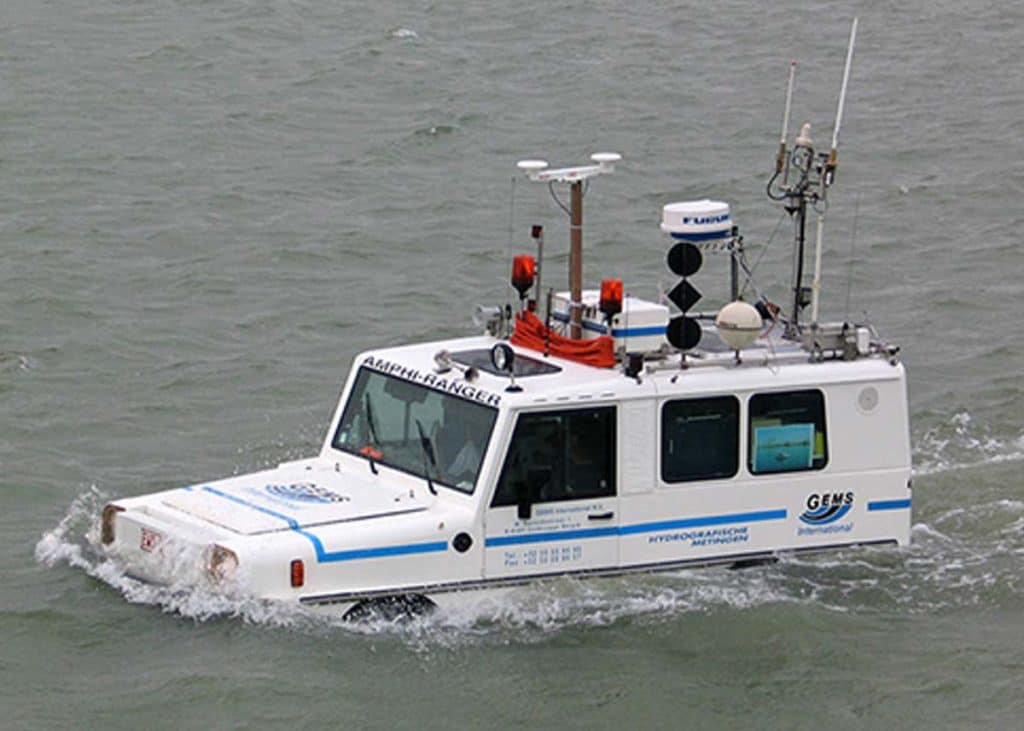 The rugged Amphi-Ranger was launched in 1985 and was the civilian version of a specialist amphibious 4WD vehicle built for pipeline maintenance. A memento of its time, the vehicle was built using an aluminum body that was part G-Wagen and had a retractable propeller for in-water use. Unlike most other amphibious vehicles before it, the Amphi-Ranger had a sturdy, removable hard-top resembling the popular RVs of the time. Unfortunately, the Amphi-Ranger would only live on for a decade, ceasing production in 1995 do to the absurdly high manufacturing costs. 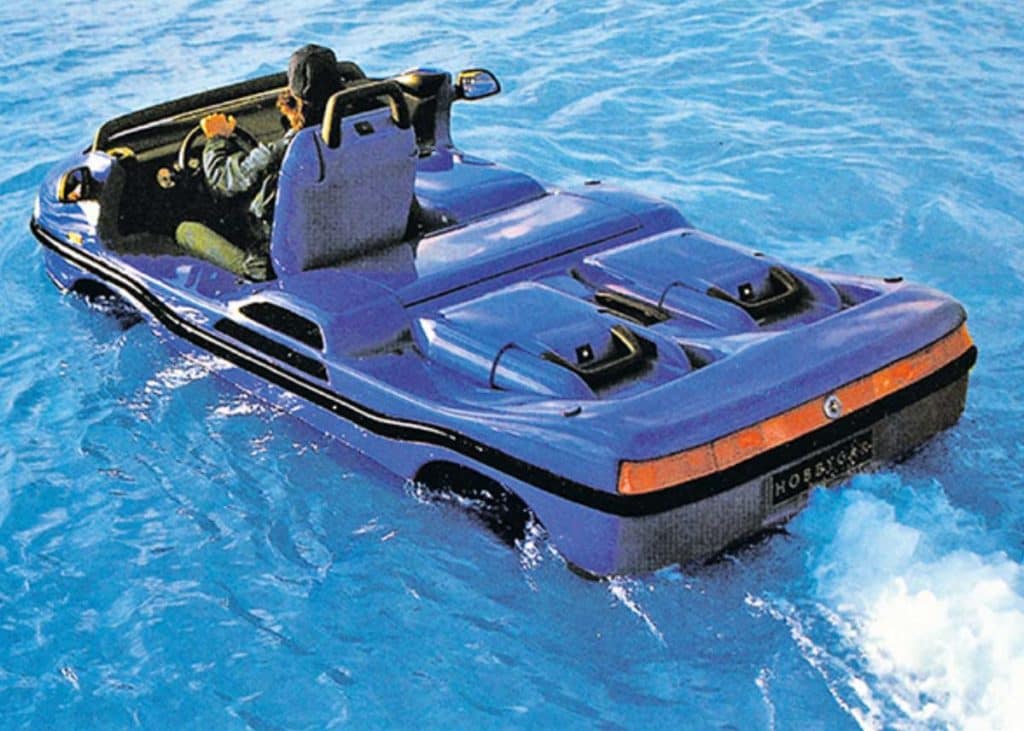 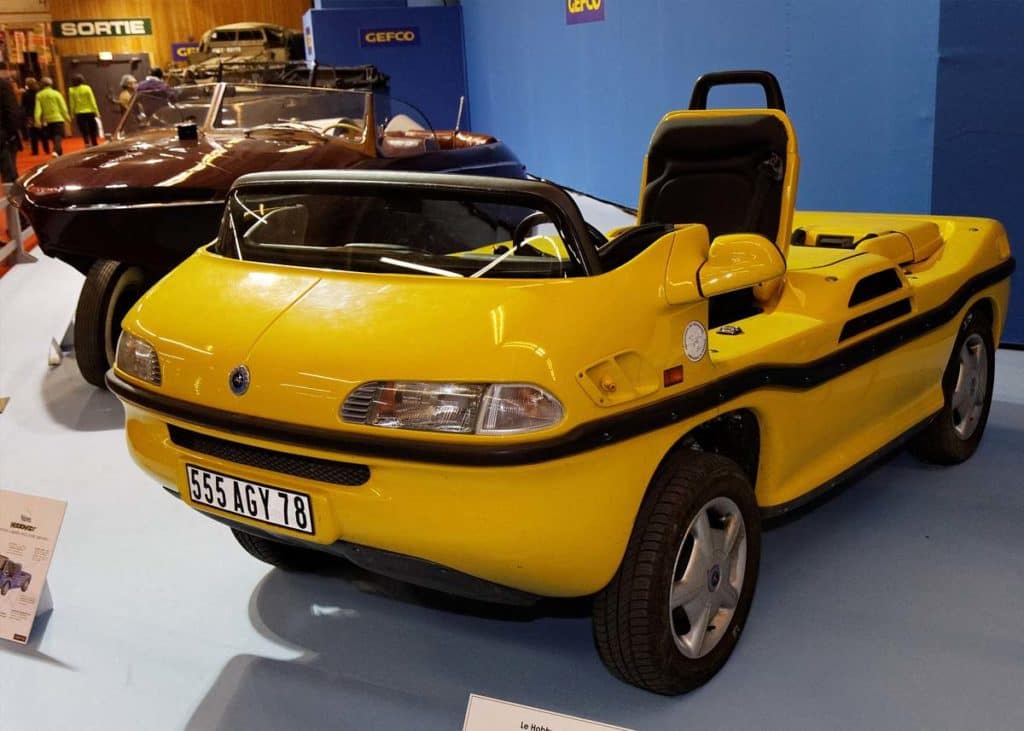 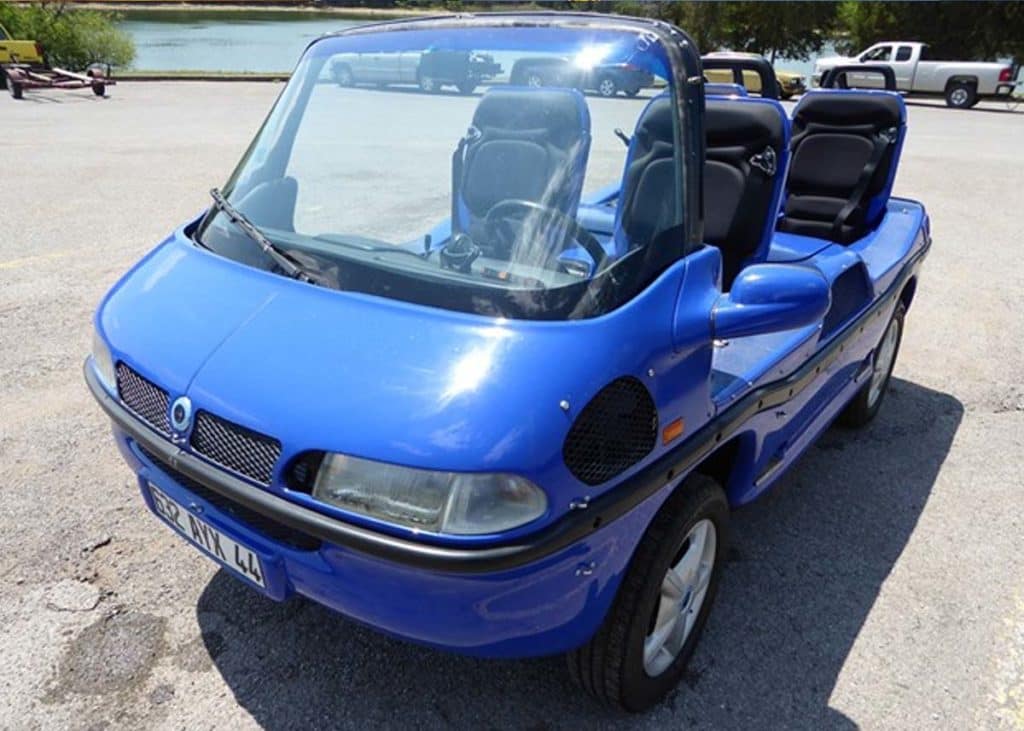 First introduced to the world at the 1992 Paris Motor Show, the Hobbycar B612 was a mid-engine amphibious vehicle which had up to four seats. The model was available for consumers with either a hard-top or soft-top, in either deep blue or an intense yellow. The 1.9-litre, four-cylinder engine powered both the four-wheel drive system on the road, or two hydro jets on water. The Hobbycar was the vision of engineer François Wardavoir. Only 52 Hobbycar B612s were built in the few short years of this unique vehicles’ production. Unfortunately, you can only find these vehicles on display in automotive museums. They never found any commercial success due to their lack of accessibility to the general public and its exceedingly high cost.