Alpha Auto Group | Blog | Why is It Toyota and Not Toyoda?

Why is It Toyota and Not Toyoda?

Kiichiro Toyoda was the son of Sakichi Toyoda, who started Toyoda Loom Works in 1926. This company created manual and machine powered looms, increasing productivity within the textile industry.

In 1933, the company established its automobile department, led by Kiichiro Toyoda. A few years later, in 1937, they decided to rename their company to Toyota for a few reasons. The first reason being that people thought it sounded better. The main reason for spelling it with a “T” instead of a “D” is because the word Toyoda in Japanese uses 10 strokes of the pen to write, whereas Toyota only uses eight. Eight is considered to be a lucky number in Japanese culture, so the name Toyota was chosen. 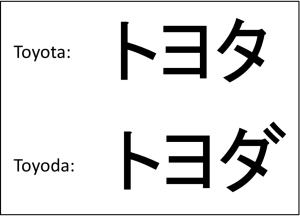 Toyoda still operates today as a separate company, creating CNC machine tools, grinders and other cutting-edge technology within the industry.